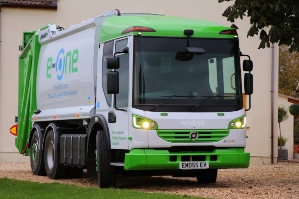 Refuse Vehicle Solutions Ltd (RVS) has sold the first e-One converted electric refuse truck and has been inundated with orders since launching its new electric repowering solution at a special two-day event this month.

The e-One refuse truck is the result of a joint initiative between RVS and Dutch electric power train developers EMOSS to repower and convert diesel refuse vehicles into electric vehicles in the UK. EMOSS are already well known as the connoisseurs of electric conversion with a successful track record in the haulage, bus, tipper and sweeper vehicle sectors. The average turnaround time to convert a diesel refuse vehicle is 12-weeks.

The e-One was received very positively by everyone who attended the launch event and the first demonstration vehicle was sold on day one to The Recycling Partnership, a commercial waste operator in the South East.

Spencer Law, Managing Director, RVS: “We couldn’t have asked for a better response. The feedback was terrific, the first e-One refuse truck has been sold and we’ve received five orders already. Work on these vehicles will start next week and we expect to complete the first vehicle within 12-weeks as promised.”

There has been so much interest in the e-One that, before being delivered to its new home, the vehicle will be visiting councils and private sector waste operators who have booked a demonstration, which includes real-life collections performed by local crew members and assisted by an RVS engineer. 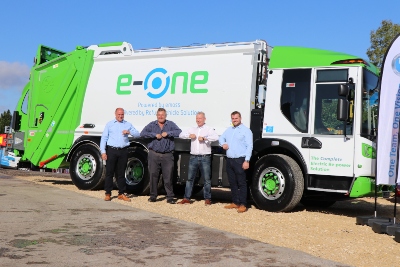 Vernon Edwards, Head of Business Development, EMOSS gave a presentation to guests: “We are delighted to partner with RVS. Their premises, capabilities, skills and knowledge are impressive, and they are very well equipped to convert diesel refuse vehicles to electric. They can also carry out warranty and service work on our behalf. We are confident that the e-One will be a great success in the UK.”

The e-One refuse vehicle is zero emissions and zero noise, and comes with a five-year battery, body and bin lift warranty. The vehicle is efficient, safe, user-friendly with on-screen monitors for drivers to check battery life. Once converted the e-One is also cheaper to run when compared with diesel refuse vehicles and requires less maintenance than a traditional RCV.

Spencer continued: “We can repower customers’ existing refuse vehicles as part of a refurbishment and deliver them a brand-new electric refuse collection vehicle (RCV) for less than half the cost of an electric RCV direct from a manufacturer. We can convert any configuration of vehicle with an EMOSS power train.”

Taking planning and building control to the cloud

Elena White explains how Isle of Anglesey County Council has been utilising the cloud to transform its planning and building control applications.

Richard Blanford explores why IT in local government is as much about partnerships and people as it is about technical competence.

Up to £160,000
You will also lead the health integration agenda, working with leaders from across the health and social care system to... Hackney, London (Greater)
Recuriter: Hackney London Borough Council

£39168.0 - £47405.0 per annum + + Excellent Benefits Package
Please note that this position is being offered as a Secondment or as a Fixed Term Contract for a period of 10 months and we would be able to consider England, Essex
Recuriter: Essex County Council