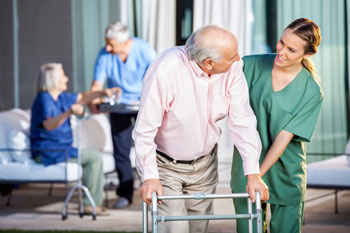 Care services for elderly and disabled people could be at risk as Brexit fuels uncertainty about the status of tens of thousands of EU workers.

New research has revealed close to 80,000 workers in the care sector could lose their right to work in the UK following a British exit from the European Union.

Published by the charity Independent Age and the International Longevity Centre-UK (ILC-UK), the new study also found the risk is made worse by failures to recruit enough British-born workers to meet the increasing demands of an ageing population.

Drawing on figures from the ONS and workforce data from the National Minimum Data Set for Social Care, the research found 84,000 European Economic Area (EEA) migrants currently work in the social care workforce - out of a total workforce of 1.43m.

Around 78,000 of these EEA workers do not have British citizenship and so their jobs would be at risk if Britain pulls out of the EU.

The social care sector is already under a lot of strain. A recent report by the King’s Fund and the Nuffield Trust warned a combination of budget cuts, staff shortages and rising demand for services are leaving elderly people with little support.

The possible loss of 80,000 workers would contribute to the shortfall of over a million care workers already predicted to hit the sector in the next twenty years.

Independent Age and ILC-UK are calling on the Government to ensure all EEA migrants currently working in social care in the UK have the right to remain post Brexit. They also urge Whitehall to make sure the contribution of future migrant social care workers is recognised in any new approach to migration.

Moreover, the charity and think tank recommend the Government improve the attraction of social care to British born workers, including by ensuring the funding of social care in England.

‘Care services for elderly and disabled people have come to rely on migrant workers, especially from the European Union, so the consequences could be severe if they are unable to work here in future,’ said the director of policy at Independent Age, Simon Bottery.

‘We need to secure the right for these essential workers to remain in the UK. But in the longer term we have to recruit more British born workers to social care and that means making sure that they are well paid, well trained and secure in their jobs. That can’t happen without a commitment to fund the care sector properly.’

Ben Franklin, the head of economics of ageing at ILC-UK, said: ‘As the population ages we are going to need thousands more care workers to support increased need.

‘It’s vital that the government recognises the invaluable contribution of workers from the EU in the care system and takes this into account when considering future models of delivering care.

‘A continual failure to support and enhance the care workforce could result in thousands of frail and older people losing out on the proper care and support that they need.’

Responding to the report, a spokesperson for the Association of Directors of Adult Social Services (ADASS) said: ‘Every minute of every day, millions of people are receiving a service from adult social care thanks to the contribution of staff from all over the world – from the UK, the EU and further afield.

‘The loss of any of this valuable workforce, in a sector already under pressure from increased demand and staffing challenges, would have a profound effect, and we will seek to take part in any relevant discussions to convey our support for EU workers currently working in our adult social care system.

‘It’s important to remind any non-British EU workers, and those whose care is provided by them, that nothing will change for some time. Until new laws are passed by the Government, the rights of all EU citizens to live and work in the UK will not change.’

‘Until then, we will be working to improve recruitment, training and staff retention in the social care sector to make sure it’s ready for any challenges that come in the future,’ they added.