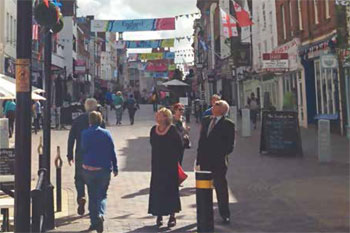 By 2013, Gloucester City Council were old hands at public space surveillance. Their camera network and control room was nudging 15 years old. But as the equipment slipped into old age, it became more difficult to find replacement parts for it. And as the system increasingly needed more maintenance to keep it in action, costs began to rise. So the surveillance system wasn’t in the rudest of health when the big news broke: Gloucester would be host city of the 2015 Rugby World Cup.

Gloucester enthusiastically embraced its host city status. With the realisation that in autumn 2015 the city would be abuzz with sports fans from around the globe, Gloucester City Council knew it had to act fast.

The failing analogue CCTV service would not be up to the job of keeping thousands of visitors safe for the six weeks of the tournament. As well as putting on several matches at the Kingsholm stadium, the city would be hosting teams and their entourages from some of the 20 nations competing for the Cup.

A wholesale replacement of the existing system was not financially viable. The council was keen to make the most of what they’d already got by upgrading the entire system to a digital solution.

That’s where BT came in. They got their heads together with the city council to work out what they needed, not just to make a success of the Rugby World Cup, but to create something that would benefit everyone in Gloucester for years to come. What BT came up with was an innovative solution that laid the foundations for Gloucester becoming a ‘smart city’ (a city that uses technology to help authorities run public services in a cannier fashion from a central control room).

Although Gloucester City Council was wary of busting the budget, which meant an upgrade rather than an acrossthe-board replacement, this didn’t hobble its ambitions. Under a five-year fixed-price managed service contract, BT delivered a beefed-up system including:

Because BT based the design on the city’s existing surveillance and control infrastructure, the council was able to avoid the disruptive civils normally associated with such large-scale projects, neatly sidestepping unnecessary dents in the city’s coffers.

In a first for the UK, BT also used the CCTV infrastructure as the location for a network of wi-fi access points. This blanketed the city centre, the park, and the route up to the rugby stadium with free public wi-fi. The service shares the transmission infrastructure with the CCTV right back to the control room, where it connects to the BT wi-fi service platform.

BT say: ‘Residents and visitors alike love it. We’re not just saying that; we’ve got the proof. Over the past three years, the number of people signing into the wi-fi through the Gloucester-branded landing page has increased every month. It’s a similar story for the volume of data passing over the network.’

As more authorities move from sodium street lighting to LED, older video cameras fail to make the cut. In the lower light produced by LED, cameras default to black and white, with grainy, low-definition images that are just too noisy to have any value.

This was the situation in Gloucester, where the control room was in the dark about what was happening on the streets at night. So when the council commissioned BT to upgrade their CCTV, it recommended digital HD cameras, which can capture high-quality colour images in low light.

The public wi-fi network isn’t just a crowd-pleasing legacy of the Rugby World Cup. It’s also positioned the city to take advantage of the Internet of Things, the collection of networking and data collection technologies driving the creation of smart cities across the world. Gloucester City Council will be able to use the CCTV infrastructure for much more than straight public surveillance. Social inclusion, retail, tourism, public health, local business services, and the environment will all benefit from the smarter decisions that a connected city makes possible.

And the increased and widespread efficiencies will keep the council’s finance folks happy, to boot.

‘Gloucester is a smart city run by a savvy council,’ says BT. Because it bundled the CCTV, control room, and wi-fi together as a combined project, the council reckoned it brought it all in for around £90,000 less than if it had opted for a series of separate initiatives.

By piggybacking the wi-fi onto the surveillance network at the same time, it was also able to deliver a higher-quality service than might otherwise have been possible.

Gloucester City Council were more than pleased with the outcome. ‘We’re delighted by the effectiveness of the new high-definition CCTV system and our upgraded control room. It’s making a huge difference to the safety and wellbeing of our residents’, said a spokesperson.