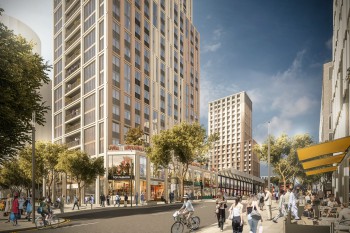 Barking and Dagenham Council is seeking to create a ‘mini-Manhattan’ in its area with a regeneration scheme that promises thousands of new homes.

The council unveiled plans to revamp its town centre yesterday promising 2,200 new homes, together with commercial and social infrastructure, to delegates at the real estate conference MIPIM.

The plan, which will be carried out by the council-owned urban regeneration company Be First, will also see the building of two hectares of green, accessible open spaces.

The station will also be improved, the council said, but it will retain its Grade II listed canopy which is based on Rome’s Termini.

‘But the new look town centre will not be a playground for the rich — it must deliver truly affordable homes and a range of great leisure and retail facilities for ordinary Londoners.’

‘By retaining the Roman style station, Barking would have a brilliant blend of the big apple and the eternal city!’ he added.

Pat Hayes, managing director of Be First said: ‘We’re raising the bar for development here in Barking and Dagenham, so our vision is deliberately ambitious, designed to ignite interest among investors, and excitement among local people.

‘It is a starting point but the end point we’re seeking is a brilliant new town centre which will serve the people of Barking and east London.’

Club used in the film The Full Monty ‘temporarily’ saved