Homelessness Reduction Act: One year on 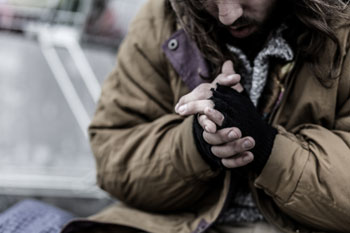 The plight of homeless people shot up the political agenda a couple of years ago after a long spell of apparent indifference. In a turn away from an agenda relying on the free market to provide solutions, an act of parliament was ushered in which would tackle the rising tide of pauperism on Britain's streets.

The landmark Homelessness Reduction Act gave local authorities more powers and responsibilities to deal with the crisis, widening the scope of those they were meant to help and tackling the threat of individuals and families being forced onto the streets before it became a reality.

A year on, however, the results are mixed. A major report by the Local Government Association based on a survey answered by 150 councils – about half the total – has found that the numbers of people presenting with the threat of being made homeless has risen dramatically. This was as expected given the Act's widening of the net so that danger signals could be spotted early.

But the survey also reveals serious and widespread fears that councils do not have the resources to provide solutions.

It found a staggering 90% of councils were 'seriously concerned' that they could not provide access to affordable housing for the victims of homelessness. Nearly two thirds said they had been forced to increase the number of people being housed in temporary and emergency accommodation – and the time they spent there had also increased.

On the face of it the Act appears to have had little effect on the continuing trend of increasing homelessness.

Latest figures from the Ministry of Housing, Communities and Local Government reveal the total number of people counted or estimated to be sleeping rough on a single night in England in Autumn 2018 were down an encouraging 2% compared with 2017. But they were 165% higher than in 2010.

The Government's decision to freeze the Local Housing Allowance – essentially a subsidy to help people pay their rent – and problems with the new Universal Credit benefits system are among the main reasons cited.

But the main cause of the continuing crisis is much simpler: despite the Government's relaxing the restrictions on councils ability to build homes using money from the 'Right to Buy' scheme last year, there is nowhere near enough low-cost 'affordable' housing available for those who need it.

The Chartered Institute of Housing points to the fact that 165,000 affordable homes have been lost since 2012, mainly as a result of sales to tenants through the Right to Buy scheme. Less than a third of these have been replaced with similar properties.

The Government's announcement in the Spring budget of a guarantee up to £3bn of borrowing by housing associations in England to support the delivery of 30,000 new homes was widely welcomed but is clearly only a modest step towards replacing the affordable homes lost so far.

The Institute's deputy chief executive Gavin Smart says: 'A chronic shortage of affordable homes combined with the welfare reforms introduced since 2012 has created a toxic mix.

'To truly get to the root of the problem, the government must invest in more genuinely affordable housing as well as reviewing the impact of welfare reforms like the benefit cap, universal credit and the housing benefit freeze for private renters.'

In the London borough of Southwark, said to suffer the second worst homelessness problem of any UK council, cabinet member for housing Stephanie Cryan says the Act has led to a very different way of dealing with people facing the threat of being without a home. It has enabled the council to expand its work with a wide range of partners to tackle the problem including Shelter and a women's aid group.

'The Homelessness Reduction Act has helped us develop what we were already doing further,' she told LocalGov. 'There are lots of reasons why people become homeless. The beauty of the HRA is that because we can work with lots of different agencies, it's much more individualised.'

Nevertheless, with average rents in the private sector at £2,000 a month for a two-bedroomed flat, the problem of homeless has not gone away. Cllr Cryan points to problems with Universal Credit and the freeze on Local Housing Allowance three years ago as particular factors causing continuing problems.

Further north in Leeds, the city council says homeless prevention is now embedded in the legal framework and it now has a low level of temporary accommodation placements, especially for homeless families.

Leeds Housing Options deals with around 15,000 households a year. Last year it helped almost a thousand cases avert the threat of homelessness. The council has not made use of bed and breakfast accommodation for the last five years, meaning not only that people get more appropriate places to stay, but also that funding that would have been spent on this can be invested in better value alternatives.

Cllr Debra Coupar, executive member for communities, says the council is committed to tackling the complex issues around rough sleeping and homelessness. 'While this will take time, the new strategy lays out how we aim to both meet the challenging government target of significantly reducing the number sleeping rough in the city and build on our successful work preventing homelessness.'

The south coast town of Worthing has seen a rise in the number of applications by people facing homelessness. The council, which operates jointly with neighbouring Adur, reports it has successfully prevented 146 households becoming homeless. Of those, 23 were able to keep their existing private rented accommodation and 43 were found alternatives.

It says it has brought professionals together from across all sectors to make sure those at risk of homelessness are identified early. This means they can intervene quickly to prevent people becoming homeless. It also means, the council says, that resources are used in the most effective way, ensuring less pressure on services such as the courts system and mental health services.

Cllr Heather Mercer, Worthing Borough Council's executive member for customer services, which includes housing, says: 'Since the introduction of the Homelessness Reduction Act, there's no doubt we have seen an increase in the number of homelessness applications, particularly from single people.

'The causes for this are extremely complex with no one single case being the same. So great effort has been made to ensure we can provide the right support to every individual who comes to us.'

The verdict on whether the Homelessness Reduction Act has proved successful is unclear for the time being. It has certainly given local authorities freer rein to tackle the problem in a creative and individualised way, and that has made a difference. But whether the Government will deal effectively with the root of the problem – the serious lack of affordable housing – remains to be seen.

In the meantime it is worth remembering the human dimension of what it means to be without somewhere to live, and the role local authorities can play in helping people find solutions.

As LGA housing spokesman Martin Tett reminds us: 'Behind every instance of homelessness lies an individual tragedy. Councils are determined to prevent it from happening and support homeless people in their communities into accommodation as quickly and as effectively as possible.'