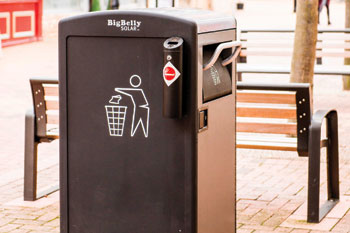 The bin has transitioned from being a humble container to an integral component in increasing recycling rates and shaping urban environments.

As the Local Government Association has said: ‘Local authorities need to plan their future direction on the basis of the best strategic fit between resources available to meet needs, expectations and prevailing conditions.’

For some, bins have now become multi-faceted communications devices, monitoring instruments and vehicles in which to boost the sustainability credentials of an area. For others, they’ve become tools to help reduce waste collection-related traffic. Crucially, however, bins have come to represent ways in which local authorities can become more resource efficient, improve their waste collection strategies and deliver cleaner streets.

What exactly has changed? Technology. For many, technology in an environmental context is associated with the Teslas of this world, the wind power firms and the hydropower companies; those that are undoubtedly trailblazers and paving the way for a sustainable future, yet who may be perceived as being cost-prohibitive and slightly ahead of their time. Alternatively, it could be those that demonstrate substantial sustainable benefits, but that require substantial, arguably prohibitive, investment in order for them to be realised.

And its inclusion within local authorities’ waste collection strategies could not be timelier.

A recently published report by the Association for Public Service Excellence revealed how spending on neighbourhood services in England fell £3.1bn or 13% between 2010/11 and 2015/16.

Likewise, a Local Government Association report entitled Evaluation of the Waste and Recycling Programme points out that UK councils spend around £853m per year on waste collection; a figure that is not only sobering but one that quickly makes clear how minor percentage improvements could translate to huge financial savings for local government. And this is where the complementary relationship between tech and the bin has flourished.

If we compare where we are now with where we were as little as a decade ago, then the level of flexibility afforded by technology is groundbreaking. It is also proving to help UK local authorities through the provision of valuable data relating to each unit, which enables them to tailor waste collection strategies per fleet or even as specific as per bin.

Rugby Borough Council, for example, replaced 56 traditional bins, each of which had traditionally received between two and three collections per day, with 23 Bigbelly smart stations. In only 12 months it reduced manual waste collections from 51,100 per year to only 1,509 per year – a saving of 49,591 collections. In the context of the £853m spent on waste collection, technology such as this could surely make a notable contribution towards reducing the overall bill.

Yet rather than solely focusing on collection frequency and the associated cost, it is also important to consider the indirect benefits of the technology, too.

In Rugby Borough Council’s case, litter picking on the main trunk roads into Rugby town centre would often get neglected as a result of the time and cost required to send a crew out to address any issues. Now, savings made as a result of smart stations are reinvested in this element of street cleansing.

Likewise, they have helped eliminate overfull bins in Rugby’s public spaces and children’s play areas without having to commit crews to make ad hoc and unplanned weekend collection trips. The system’s compaction technology buys time until the beginning of the working week by increasing the units’ capacity when full.

Of course, this kind of technology represents an ideal solution for delivering clean streets in public spaces or in areas with high footfall. Equally, a like for like replacement of existing container fleets with fleets of smart stations would, in many cases, not always be the most economical solution.

However, with the advancement of fill level technology sensors, which can be installed in any bin and render each and every container an intelligent container, there are now multiple routes for local authorities to achieve clean streets in parallel with becoming more agile and much leaner.

Technology, if used correctly, really can equate to clean streets. And, as local authorities are being forced to be more creative with their budgets, suppliers and manufacturers are thankfully becoming more creative with their solutions, too. Not only will this ensure that our streets continue to be clean but also reinforce the increasingly important role that the bin now has in modern society.