County signs street lighting contract worth up to £41m 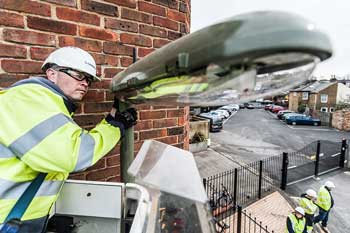 A county has signed a 12-year street lighting contract worth up to £41m in a bid to reduce energy consumption and cut long-term costs.

Gloucestershire CC has employed construction firm Skanska to replace almost 55,000 of its standard street lanterns with energy efficient LEDs and maintain the new stock until 2027.

The lighting upgrades are expected to save the local authority £22m in energy bills over 12 years, while cutting carbon emissions by an estimated 7,000 tonnes every 12 months.

A central management system will also be installed into each lantern, allowing engineers to monitor the performance of each unit, adjust brightness and detect faults quickly.

Installation of the lights will begin in November and conclude in March 2019.

The total contract value for Skanska stands at between £32-41m depending on the level of additional work.

Cllr Vernon Smith, cabinet member for highways and flood at Gloucestershire County Council, said: ‘LED lighting is a modern, energy-efficient system with many benefits. It will mean we are using less energy and reducing our impact on the environment, as well as saving money long term. We look forward to working with Skanska on the project.’

Skanska operations director, James Holmes, added: ‘The council’s investment in LED street lighting will pay large dividends over the coming years, both in terms of carbon efficiency and value for money. At a time when local authorities are seeking better value, LED conversions are bound to become the norm.

‘We already have excellent relationships with other authorities in the south west, which makes it all the more pleasing to be joining up with Gloucestershire County Council, particularly in street lighting, which is a sector of strategic interest for us. We are naturally delighted to be helping to get the council’s new street lighting initiative up and running, so the community can start to feel the benefits as quickly as possible.’