The Muslim War Cemetery Peace Garden was our first site visit of the year and there couldn’t have been a better way to re-launch the Street Design Awards.

The space that’s been created is not only visually stunning, but it also demonstrates what can be achieved by a passionate and dedicated group of people. In fact, our judges from the Landscape Institute awarded it near perfect scores in both quality of design and for achieving its aims and objectives.

To say that the restoration of the burial site has been a labour of love must be the understatement of the year.

For years, the Horsell Common Preservation Society had been trying to raise funds to renovate and protect the site before securing funding from English Heritage and Woking Borough Council. However, their hard work has certainly paid off and this hidden gem is a credit to everyone involved.

The Burial Ground was originally founded in 1917 to provide a last resting place for Allied Muslim soldiers who died in this country during WW1 and WW2. Unfortunately vandalism meant the graves of the 27 soldiers were moved in 1969 to the nearby Brookwood Military Cemetery.

Following the successful funding to repair the boundary wall and the Chattri, the terra firma Consultancy were appointed to create a design for the garden within the site. 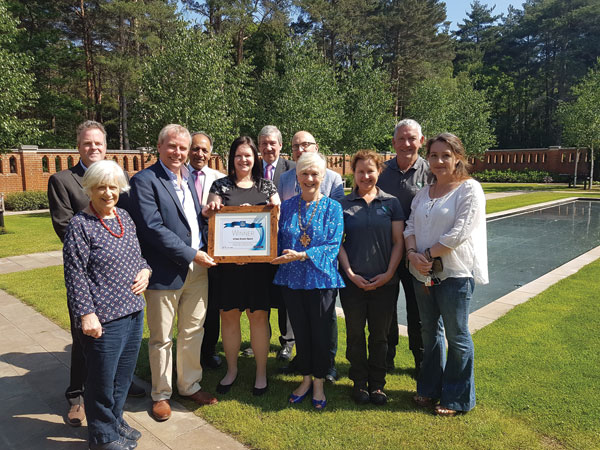 The garden brings together the cultural expression of a traditional Islamic garden with the natural elements of the common.

The final design is underlaid with symbolism that celebrates the vitally important contribution made to the Allied war effort by armies from the Indian sub-continent.

A formal geometry is set up from the walls, around a central water body fed by a rill and a small waterfall from an upper-pool.

An up-lit monolithic memorial stone has been inscribed with the names of the 27 servicemen and is set on a raised platform within a pool of reflecting water. There are also 27 birch trees planted within the garden to represent the original number of burials. Two stone ‘prayer mats’ have been located in grass at the front of the memorial facing towards Mecca.

Paths of Indian sandstone lead around the garden, while planted beds of birch and heather provide seasonal colour and spatial definition.

Outer boundaries include evergreen and deciduous plantings in simple swathes, kept low so not to detract from the listed walls but with sentinel columnar plantings at opposite ends, either side of the Chattri and the memorial stone.

Overall the scheme serves as a timely reminder of togetherness in today’s multicultural Britain.