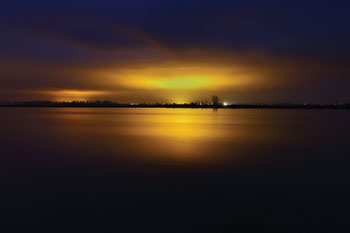 Environmental concern over exterior lighting and light pollution is not a new phenomenon. However, it does appear to be growing in momentum. Particularly over the last two years, as the industry combats increased concerns (and negative press) over the effects of blue light on human health and sleep deprivation.

A recent study, led by Dr Christopher Kyba from GFZ (the German Research Centre for Geoscience), found a 2.2% increase per year in the Earth’s artificially lit surface (over four years).

But are LED luminaires responsible? This study suggested so.

Measured using a specially calibrated satellite radiometer - higher light pollution levels were recorded, with previously unlit areas now being lit with LED allegedly to blame - more lighting - due to decreased costs. But would these areas have been lit anyway with or without LED?

One thing’s for sure, LED is here to stay. Replacing the discharge lamp in the same way the CD replaced the cassette. So is it more a case of using LED the right way?

Now with the initial goals for switching, from traditional lamped sources to LED, achieved - cost and energy savings - the question for LED now appears to be: what can be done to move the focus away from just savings?

Professor Kevin Gaston from the University of Exeter, in an interview with the BBC, said: ‘When we think of how humanity messes with the environment, it’s a costly thing to fix or reverse. For light, it’s just a case of directing it where we need it.’

Now as the market is maturing, it’s easy to look back and criticise early LED products, with their poor optical control and very high CCT (by today’s standards): but LEDs have come a long way in recent years.

There are now a multitude of types, efficacies and colour temperatures. Colour quality has also increased dramatically, with improvements continuing to be made. LED now offers the perfect opportunity for minimising lighting pollution. Instead of using a reflector, as with traditional light sources, with its many focal points and lost lumens with every reflection, LED has collimating lenses and tertiary lenses that project the light where it’s needed.

High quality lenses and LEDs make it possible to have very precise control of light. With intelligently designed luminaires ensuring no light above the horizontal, eliminating sky glow.

Even more can be accomplished by selecting the appropriate correlated colour temperature (CCT), measured in Kelvin (K), for the application at hand. The early adoption of LED lighting was almost all cool white, circa 5000K, which is much colder in appearance than the warm, circa 2000K, sodium lighting we had become so accustomed to over the years.

The cooler the CCT, generally, the higher the blue light component, and thus the greater the environmental and human impact. In the beginning, there was a sound argument for the selection of 5000K+ LEDs, the only way, at the time to compete with the more powerful lamps that were already in situ. But now - 4000K (which appears to be the new industry standard) - has increased in yield enough to compete with the 5000K LEDs of yore. And warmer colour temperatures, 3500K, 3000K, even 2700K - are available to bring lighting into a more comfortable and environmentally considerate range.

Are LEDs stealing the night sky? Well, like most things, the right tools in the wrong hands can be dangerous.

We all have a part to play in ensuring appropriate application of this technology. Ensuring that good lighting control, appropriate distributions, shielding, dimming, colour temperature and other facets of LED lighting are used responsibly and proactively.

Dr Kyba explains it perfectly: ‘Human vision relies on contrast, not the amount of light.’

Through good lighting design it is possible to reduce contrast, the amount of light used – and in turn reduce light pollution and skyglow – and still have a better lit environment and energy savings. Win-win.

This feature first appeared in Local Government News magazine. Sign up to your free copy here.