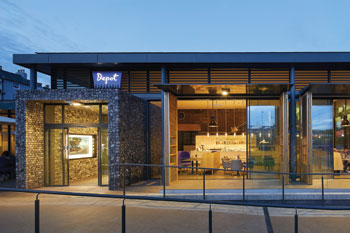 A new cinema in East Sussex has been awarded the title of ‘best public service building’ for its combination of technical innovation, sustainability and design.

The Depot is a community cinema located on Pinwell Road in the town of Lewes which shows features and independent art-house films, hosts events, exhibitions and festivals, and provides facilities for film education and community activities.

A privately funded philanthropic project, the three-screened cinema was built inside an existing warehouse building, which has a glazed extension housing the box office, café/bar and restaurant. It takes its name from its site, which was originally a GPO depot and, more recently, a Harvey’s Brewery depot.

It was designed by Burrell Foley Fischer LLP for the charity Lewes Community Screen and was built by Durtnell & Sons Ltd. The project was the brainchild of Carmen Slijpen and Robert Senior, two Lewes residents who, according to the cinema’s website, share ‘a passion for cinema.’ It was a 2018 Screen Awards Cinema of the Year nominee.

The cinema was nominated for the LABC Building Excellence Awards by the building control team at Lewes District Council. These awards showcase buildings and design teams that have had to overcome complex technical or construction issues and building site constraints.

Mr Everall said the awards were ‘unique’ because they recognised ‘how this cooperation improves building standards and professionalism across the industry.’

The panel of expert judges named The Depot as the ‘best public service building’ in England and Wales at the LABC Building Excellence Awards ceremony, which was held in London in early November.

Commenting on the cinema, the judges said: ‘The Depot is a lively cinema hub with exhibition space, café and restaurant. Its design and innovative use of technology ensures it’s fully inclusive for the whole community. External lighting minimises light pollution and the extensive green roof of local plants responds to the special character of the South Downs.’

Other categories included ‘best change of use of an existing building or conversion’, ‘best educational building’, ‘best extension or alteration to an existing home’, and ‘best partnership with a local authority building control team.’

This feature first appeared in Public Property magazine. Email l.sharman@hgluk.com to sign up for your own free copy.