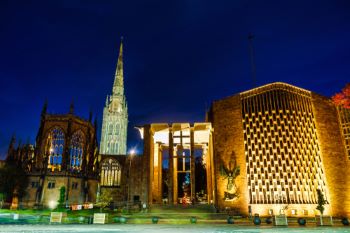 A record 20 places from across the UK have submitted an expression of interest to become the UK City of Culture 2025.

The competition, delivered by the Department for Digital, Culture, Media and Sport (DCMS) in collaboration with the devolved administrations, uses culture as a catalyst putting often overlooked parts of the UK on the cultural map internationally.

Regions and groups of towns, as well as cities, have been encouraged to apply in this competition.

The DCMS are awarding grants of £40,000 to successful longlisted places for the first time to support their long applications.

The winner, which will be announced next year, will take on the baton from Coventry as the 2021 UK City of Culture and be at the centre of the UK’s cultural spotlight in 2025.

‘This record number of applications from all four corners of the country is testament to the huge success of City of Culture in generating investment, creating jobs and boosting local pride,’ said culture secretary Oliver Dowden.

‘This prestigious prize creates a fantastic opportunity for towns and cities to build back better from the pandemic and I wish all bidders the very best of luck.’

Sir Phil Redmond, chair of the City of Culture Expert Advisory Panel, commented: ‘From Derry-Londonderry to Hull and Coventry it has been a difficult and rewarding challenge to select the next UK City of Culture, and the list of potential candidates for 2025 indicates that life in the immediate future is going to be even more challenging!

‘The three previous title holders have demonstrated the transformative and catalytic effect culture can bring about, even within places that have been ultimately unsuccessful but have gone on to develop collaborative and sustainable partnerships.

‘The list for 2025 also demonstrates the breadth of ambition, aspiration and innovation that exists from coast to coast and nation to nation across the UK and I am looking forward to that challenge of immersing myself once again in the UK’s rich seam of creativity.’