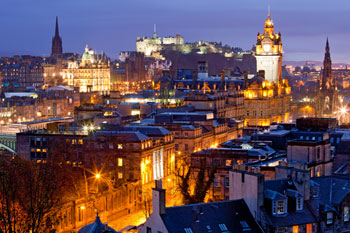 Theresa May has signed off on a deal that will bring hundreds of millions of pounds worth of investment into the South East of Scotland.

The UK and Scottish governments have each committed £300m to the Edinburgh City Deal, the terms of which were agreed last year.

The funds will go to scientific research on space, health sciences, agri-tech and food and drink at Heriot-Watt, Queen Margaret and Edinburgh universities.

The deal will also see the creation of five new innovation hubs, including in robotics and space technologies, and a new 1000-seat Edinburgh concert hall.

The Prime Minister will also announce £13m in funding for six science hubs across Scotland.

Making the announcement during a visit to the Edinburgh festival today, the Prime Minister said: ‘Alongside the Scottish government and local partners, I will be confirming £300m, as part of a wider £1bn investment by the UK Government through City Deals in Scotland, to create jobs and open up new economic opportunities throughout the nation.

‘These City Deals build on existing strengths to open up new possibilities for the future in Scotland and the whole of the UK as part of our modern Industrial Strategy.

‘Today I have also announced a further £13m for investment in six science centres in the UK, including Dundee and Glasgow, to drive innovation in science and technology.’

‘As we leave the EU, the UK Government is working in partnership with business, academia and the devolved administrations to create more good jobs and spread economic prosperity across the country,’ Mrs May continued.

‘By making the most of our country’s assets and the talents of all of our people, we can build a brighter future for the whole UK.’