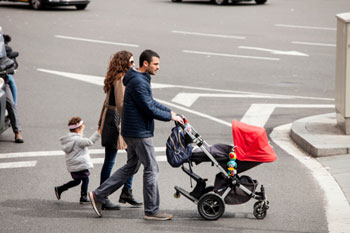 New guidance from the National Institute for Health and Care Excellence (NICE) recommends that new and upgraded roads should prioritise pedestrians, cyclists and public transport over motorised vehicles.

The aim is to encourage physical activity by ensuring that it is safe for people to walk and cycle.

‘Getting people to be more physically active by increasing the amount they walk or cycle has the potential to benefit both the individual and the health system,’ says Professor Gillian Leng, deputy chief executive and director of health and social care at NICE.

‘As a society we are facing a looming Type 2 diabetes crisis, which is in part caused by people not exercising enough. We need more people to change their lifestyle and to take more exercise.’

People feel less safe when they walk or cycle compared with when they drive, according to Professor Leng.

‘So asking planners to prioritise pedestrians, cyclists and those who use public transport when roads are built or upgraded can ensure they are safe, attractive and designed to encourage people to get out from behind their wheel.’

‘For decades our towns and cities have been built to prioritise motor vehicles; resulting in unhealthy air, congested roads and a decline in people walking everyday journeys,’ he says.

‘The better planning that NICE is suggesting is absolutely necessary. Those who are the most vulnerable — children and older people — are currently suffering the most from bad air, unhealthy lifestyles and social isolation.

‘It’s time that towns and cities were built for everyone — first and foremost for those on foot. Placing key services like schools, GP surgeries and bus stops within walking distance is vital. More people getting out and walking everyday journeys, such as to work or school, will make us a healthier country.’