Mersive Technologies, a leader in wireless collaboration solutions, has announced that Southwark Council is sharing content wirelessly using Solstice at public and internal meetings. The council’s area is immediately to the South of the Thames and is home to landmarks including the HMS Belfast, The Shard, the Imperial War Museum and the Bankside Gallery.

Southwark Council is advanced in its use of AV and live streams meetings of the main council and its planning committee. It is continually seeking to improve its productivity, and especially to identify ways in which new technology can be used to support smart working amongst its 4000 staff and streamline delivery of services to residents of the borough. The Organizational Transformation Department is tasked with driving this programme. It identified a requirement to improve the AV provision in meeting rooms with a capacity of six or more people at its Tooley Street headquarters.

Southwark Council considered this problem in the round, and concluded that it wasn’t enough to simply put better screens in each room. The screens needed to be easily accessible from staff laptops and other devices including those introduced by members of the public. Cables are awkward. There’s not only potential compatibility issues, but also the risk of loss or damage. Southwark therefore specified wireless content sharing, supporting a wide range of devices including Apple and Android tablets and phones as well as laptops.

While searching for a solution, the council approached David Boyd of Unified Consultancy, who had recently implemented a new Wi-Fi service at the council. David recommended that Southwark evaluate Mersive Solstice to complement the addition of 65 new 43” to 86” Large Format Displays and Clevertouch displays in its meeting rooms and public areas. After evaluating alternative solutions, a pilot project and following council procurement processes, Southwark Council went ahead and equipped 65 meeting rooms with Solstice. 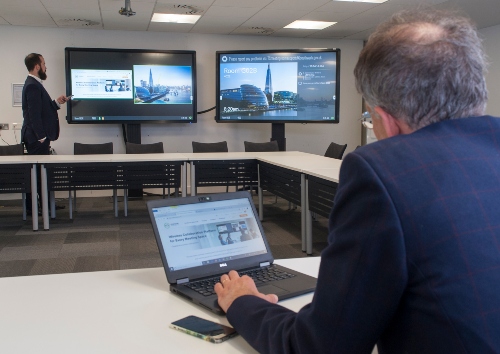 Mersive Solstice ticked all the boxes for the Southwark Council project. David Boyd, Director of Unified Consultancy explains, “Ease of connection was crucial here – and the fact that iOS, Android and Windows devices can connect easily with no dongle was a major plus. iPhone and iPad users can use native mirroring, Android users can use Miracast and Windows laptop users can download and install the App without administrator rights.”

Southwark Council is delighted both with the ease with which Mersive Solstice was rolled out and the user reaction afterwards. David Boyd commented, “User feedback has been overwhelmingly positive. Even those who tend to be easily intimidated by new technology found Solstice easy to use after a short training session. The council uses many external trainers and Solstice has made a huge difference to them. Whereas in the past they’d often arrive an hour beforehand to get set up, now they know that they can simply turn up and connect in just a few minutes from any device that they happen to be using.”

He added, “The IT Department were happy with Solstice too. There are two networks in the building, a guest network for members of the public and a secure network for staff. Solstice connects to both, allowing all building users to have access to the screens. The IT team looked specifically at security before and during the pilot phase and concluded that Solstice is well designed from this perspective.”

The main goal of the installation was to streamline the operation, and Solstice has delivered from this standpoint. It believes that Solstice has made preparation for meetings quicker and easier and time in meetings much more productive. There is no need to print of multiple copies of documents to share out and no need for awkward breaks as users swap cables between laptops. This greatly improves the sense of focus and purpose in meetings.

Having mastered the core functionality, the council is working with users and identifying new ways of using Solstice. Southwark Council is looking at implementing video conferencing and would want to integrate Solstice into its solution. The HDMI-IN port on Solstice Gen3 lend itself very well to this requirement.

Southwark is also considering the use of meeting room screens to deliver organizational or promotional messages before and after meetings such as information about upcoming events, internal staff messages and public information announcements. This can be achieved using the digital signage integration now available in Solstice.

Up to £18525 per annum
Essex County Council (ECC) are delighted to be supporting Achieve Together to recruit Support Workers for their residential service, Peach Cottage a England, Essex, Braintree
Recuriter: Essex County Council

Up to £9.50 per hour
Essex County Council (ECC) are delighted to be supporting Achieve Together to recruit Support Workers for their supported living service, Lancaster G England, Essex, Clacton-On-Sea
Recuriter: Essex County Council

Up to £18000 per annum
Essex County Council (ECC) are delighted to be supporting Achieve Together to recruit Support Workers for their supported living service, Holland Roa England, Essex, Clacton-On-Sea
Recuriter: Essex County Council