How to be pitch perfect 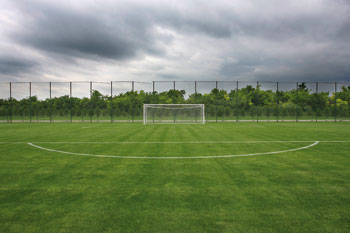 The services are recharged, using an out-dated schedule of rates and prices calculated during the times of compulsory competitive tendering (and since adjusted each year based on inflation) when, due to the original competitive nature of the process, many of the calculations did not reflect the true cost of the work. Nor did they reveal hidden costs such as the rising price of fuel and varying materials prices. Street scene consequently carried out certain operations at a loss.

However, following cuts in central Government funding, the council investigated a range of possible efficiency savings – which included maintaining the white lines on sports pitches.

The council was purchasing a ‘B’ line marking paint supplied as a concentrate liquid. This was diluted with water in various ratios depending on the quality, brightness and durability of the line required; ideally a dilution rate of 15 parts water to one part paint. At this rate, 0.75 litre of paint was needed to mark a football pitch, which took an average of 20 minutes.

The pressurised spray line marking machines used (purchased from the same supplier) could be calibrated to achieve differing levels of output depending on the type of spray nozzle used. The nozzle will either increase or decrease the cost of the operation due to the quantity of fluid discharged. The nozzle used was a flat fan nozzle, for the lowest output, therefore keeping the cost of the operation as low as possible.

In addition, the added cost of labour has to be added for the time taken by the operator to carry out the work. This is the true cost of the labour to the council, not just how much the operative gets paid. Also, because line marking is a mobile operation, a vehicle is used for transporting both the operative and the materials, and the charge for this is included in the council’s pricing structure.

Once the initial cost of the actual operation was established, the council then looked further at the work to determine if there were any hidden costs not accounted for that would have a detrimental effect on efficiency.

It was identified that one of the major problems was that the marking machine had a maximum tank capacity of 15 litres of fluid and, based on the output calculations using the flat fan nozzle, a discharge 12 litres of mixed liquid would be achieved per football pitch. This meant the machine had to be refilled after the marking of each pitch. The mixing and pouring, then returning the machine ready for the next pitch, added 15 minutes to the task and was essentially non-productive time.

Contact was made with other industry suppliers including Rigby Taylor, a company at the forefront of supplying innovative products for the successful management and maintenance of turf surfaces, and an established supplier of amenity products used by the council for a number of years.

• As no water is required to dilute the paint, there’s no diluting, mixing or pouring – which also means 15 minutes of non-productive time is saved on every pitch marked, totalling 816 man hours each year.
• 1.5 litres of paint per pitch is used – using the Rigby Taylor red cone (04) type nozzle - and because the paint is supplied in 10-litre containers, six pitches can be marked before changing to a new container. This saves 1.5 hours across six pitches: a significant labour saving cost of 23.62%.
• With the council carrying out 3,267 individual markings of football pitches each financial year, the switch to Rigby Taylor paint and machines made an impressive annual labour saving of £8,820 in this area alone!
• The former paint product required 11.25 litres of water for every pitch marked so, with 3,267 pitch makings there is also a saving of up to 36,753 litres of water.

An initial purchase of 170 litres of the Impact paint was made and Rigby Taylor loaned an iGO marking machine. It was agreed that if the council entered into a permanent supply agreement, the machine would be supplied and serviced by Rigby Taylor at no cost to the council.

The initial trials were established following a visit to the factory where the paint is manufactured, and a sample of the dilute concentrate product was provided for comparison. A demonstration compared the two paints’ quality of coverage and line brightness: Impact produced a much brighter line. And it was highlighted that the Impact line would last longer due to the paint’s different adjuvants and bonding agents which adhere more effectively to the grass leaf making it more resistant to rain and reducing the ‘washing out process’ of the paint.

Given the additional benefit of increased durability, the use of Impact now also provides more flexibility in adjusting the scheduling of marking operations. Historically, using the dilute concentrate paint, line marking was always carried on the last day of the working week to give the line the best possible chance of maintaining its colour for weekend football. Nowadays, line marking can be scheduled for any day of the working week with the knowledge that a line applied on a Monday will still be of the quality required.

As an added bonus, further investigation has identified that 25% of the pitches are subject to light use only and by using Impact, these only now need to be marked once a fortnight rather than weekly, providing even greater savings: we have reduced the number of individual pitch markings per year from 3,267 to 2,465, a 25% saving.