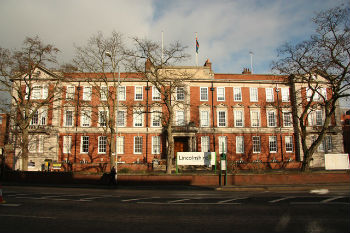 Four county council leaders in the East Midlands have taken the first step towards a ‘future devolution deal.’

The leaders of Nottinghamshire, Derbyshire, Leicestershire and Lincolnshire (pictured) have agreed to explore a Strategic Alliance that could lead to the creation of a unified authority.

The Strategic Alliance, which would also include the cities of Derby, Leicester and Nottingham, the Local Enterprise Partnerships and Chambers of Commerce, would focus on transport, infrastructure, jobs and strategic planning.

‘We believe that we can achieve much more if we work together, particularly in the areas of connectivity, trade, investment and growth,’ the county council leaders said in a joint statement.

They cited an East Midlands Councils report which revealed their residents received the lowest Government spending on economic development and transport in the country.

Rail expenditure in the region is just £91 per person, compared to £746 per person in London, according to the report.

‘This will remain the case unless we join forces and make our voice heard,’ the statement said.

‘We want to work together to grow our economy so that we build on our strengths and tackle our challenges.’

The county council leaders said the next step will be further talks on how to take the Strategic Alliance forward ‘with a view to eventually being able to draw down powers and funding from Government.’