Families dependent only on a father’s income ‘struggling’, report warns 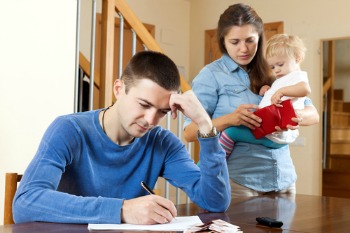 Families dependent on the father’s earnings alone are struggling to get by because of the ‘extremely slow’ growth in their income, financial experts warn.

New research published today by the Institute for Fiscal Research (IFS) has found the earnings of working fathers increased an average of 0.3% a year over the last 20 years, while mothers’ earnings grew more than 2% a year.

Funded by the Joseph Rowntree Foundation (JRF), the IFS’ research discovered 85% of one-earner families do not have a working mother and so have not benefitted from the increase in the earnings of mothers.

The IFS’ report found the only reason the incomes of one-earner families are any higher now than in the mid 1990s is that benefit and tax credit payments to this group have doubled since then.

The slow earnings growth for fathers in one-earner couples partly reflects the fact that these fathers are less likely than other fathers to be in well-paid professional or managerial jobs.

It is also because these fathers are more likely to have been born abroad (35% of them in 2015–16). Those born abroad tend to earn less than those born in the UK with the same qualifications.

The report said this was important for understanding low living standards among children. 43% of children living with one working parent and one non-working parent were in relative income poverty in 2015–16, after accounting for housing costs – up from 33% in 1994–95.

‘With men's earnings growing so slowly over the last 20 years, it has become increasingly hard for families dependent on the father’s earnings alone to keep up with other families,’ said Jonathan Cribb, a senior research economist at IFS and an author of the new report.

‘The average incomes of one-earner couples with children have not grown at all since the early 2000s, and the only reason that they are any higher than in the mid 1990s is the greater generosity of benefits and tax credits.’

Andrew Hood, a senior research economist at IFS and another author of the report, said: ‘Boosting the incomes of large numbers of families dependent on fathers' earnings may well be challenging.

‘The vast majority of the fathers are already working full time, most of the mothers are not actively seeking paid work, and increases in in-work benefits targeted at the group would be likely to further weaken the financial incentive for those families to become dual earners.

‘But increasingly it is a challenge that governments wanting to improve the living standards of low-income children should be considering.’

£35,900 - £48,500 per annum
This is an opportunity to join a thriving and agile Private Sector Housing Team, within a well-established Environmental Health department. Kensington and Chelsea, London (Greater)
Recuriter: The Royal Borough of Kensington & Chelsea Council