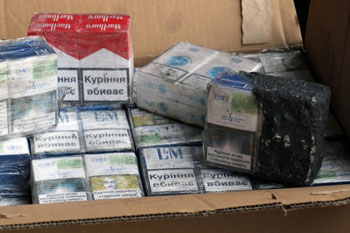 Figures show that criminal are making £100m a year from London’s illegal tobacco trade, with research suggesting around 15% of all cigarettes smoked in London come from illicit trade.

Experts also warn that those involved in the illegal tobacco trade are also likely to be involved in drug dealing, money laundering, and people trafficking.

Cllr Jas Athwal, London Councils’ executive member for crime & public protection, said: ‘The threat of illegal tobacco should not be underestimated. Illegal tobacco brings crime into communities and makes it easier for young people to start smoking. It also undermines people’s efforts to improve their health by giving up smoking.

’London boroughs are continuing to fight against the sale and distribution of these dangerous products, with our trading standards and public health teams leading local clamp downs and raising awareness among our communities.’

The ‘Stamp IT Out London’ campaign against illegal tobacco has been launched, aiming to make it less socially acceptable to buy and sell illegal tobacco. Paul Plant, interim regional director for Public Health England London, said: ‘All tobacco is harmful but the illegal sale of single cigarettes makes it easier and more affordable for young people to start smoking and discourages adults from quitting, perpetuating poor health across generations.

’Many of the people smuggling, distributing and selling illegal tobacco are also involved in drug dealing, money laundering and people trafficking, increasing the risk of harm to Londoners.’

£50,826 - £53,928
We are investing in creating a better borough for all our residents and bettering the lives of... Haringey, London (Greater)
Recuriter: Haringey London Borough Council

£148,238 per annum
The new CFO/CE will need to demonstrate a clear understanding of the issues facing the Fire and Rescue Service - both within... North Somerset
Recuriter: Avon Fire & Rescue

£30032 - £31610 per annum + (amount shown is salary plus allowances)
Refuse Driver (LGV Chargehand Driver)(starting total pay of £30,032 - this is made up of the base grade salary plus contractual overtime and allowance England, London, Woolwich
Recuriter: Royal Borough of Greenwich

Up to £83,424 (pay award pending)
As one of our two Corporate Directors reporting to the Chief Executive to form our Senior Leadership Team your... Gedling, Nottingham
Recuriter: Gedling Borough Council