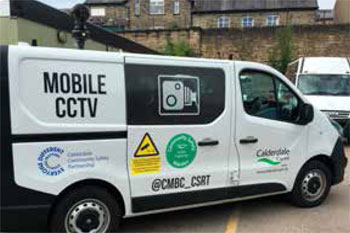 Calderdale MBC realised it needed to replace its old surveillance system, which it had been relying on to keep citizens safe & reassured since 2003.

Calderdale MBC’s 15 year-old system was not just old hat, it was unreliable. Cameras and recording equipment needed constant and costly attention to keep them in working order.

But perhaps the most pressing problem was that the council had already pushed the system to its limits: it couldn’t be expanded any further. That meant the council couldn’t install new cameras to cover public spaces that were not even on the map back in 2003.

BT was keen to make sure that Calderdale didn’t run into similar expansion-restricting problems in the next 15 years, so it completely upgraded all of the analogue circuits to digital, giving the council flexibility to expand the system easily and comprehensively.

As usual with its customers, we, BT, fully project managed planning, delivery, installation, and training of the solution:

How Calderdale’s CCTV pays its way

Investing in a modern surveillance system is a revenue opportunity.

It’s not just about watching stuff on screens; it can also help you cut costs and generate revenue.

Calderdale MBC know this. Because its command and control centre can integrate multiple disparate surveillance systems, it doesn’t just run its public services, it supplies services to the private sector.

Controlling over 100 cameras for Pennine Housing (a social housing association) and providing out-of-hours CCTV coverage for The Woolshops Shopping Centre is helping to mitigate the costs of the public system.

Although it is dealing with different third party camera systems, plus, in the city centre, its own Bosch camera network, Calderdale’s Qognify PSIM platform integrates them into a single Graphical User Interface (GUI).

Because the systems all look the same to the operators in the control room, Calderdale can easily manage surveillance for other organisations.

Although Calderdale manages its surveillance system for the usual activities: catching criminals red-handed, traffic management, keeping a watchful eye on large scale events, and so on, like many local authorities they also have local challenges to counter.

Following the catastrophic flooding in the region on Boxing Day 2015 when the rampaging river Calder burst its banks, Calderdale MBC recognised an urgent need for better flood defence monitoring.

BT had the ideal solution: the Minicam, a small, wireless, highly portable camera that you can deploy very rapidly indeed. The council is now using these cameras at strategic locations along the Calder, remotely monitoring prime flood areas. If the floods return, it can quickly assess the scale of the problem and react appropriately, fast.

One of the clever things about the re-deployable camera approach is that the council can switch them to other locations easily. Which is exactly what it did when the Tour De Yorkshire whizzed through the area and when the BBC’s Antiques Roadshow rolled into town. Then, when the events were over, the council was able to return the cameras to their previous locations by the river without any hassle.

Something else that caught the eye of the council was BT’s in-vehicle surveillance solutions. Calderdale snapped up four in-vehicle mobile cameras for use in one of their liveried vans, which they’re using for ad hoc surveillance activities out in the community. Because Calderdale uses encoder technology to live stream video from the van directly back to the control room, it doesn’t have to waste time recording footage on-site that it then has to manually deliver back to HQ. It all happens in real-time, which is a real boon.

WHAT HAS CALDERDALE GOT OUT OF IT?