Councils back ban on pavement parking 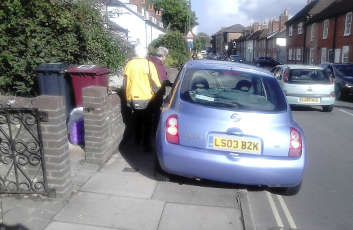 The Department for Transport (DfT) has pledged to set out new plans to tackle pavement parking, which it said would make streets safer for parents and disabled people.

Officials said the Government will consult in the summer on proposals designed to improve the lives of people with mobility or sight impairments, as well as parents with prams who may be forced into the road to get around parked cars.

The DfT said a 12-week consultation will include options such as allowing local authorities with civil parking enforcement powers 'to crack down on unnecessary obstruction of the pavement'. Currently, outside London, only police have this power.

The consultation will also consider how a nationwide ban on pavement parking enforced by local authorities might work, ‘allowing for any necessary exceptions or designated spots for pavement parking where needed, and how a tailored approach may be required in rural and suburban areas which face very different challenges’.

Transport secretary Grant Shapps said: ‘Vehicles parked on the pavement can cause very real difficulties for many pedestrians. That’s why I am taking action to make pavements safer and I will be launching a consultation to find a long-term solution for this complex issue.’

The announcement represents the Government’s response to a report on the issue from the (previous) Transport Select Committee.

The committed said that, while it ‘welcomes the positive response, clarity is needed on when these pledges will be achieved’.

Committee chair Huw Merriman MP said: ‘I am pleased the Government has taken on board the previous committee’s concerns about the very real difficulties presented by pavement parking and our proposed solutions. There is much to praise in this response and we particularly welcome the Department for Transport’s intention to consult the public on how a ban on pavement parking would work for them.

'However, we have to now deliver this change. The Government promised to look into the issue in 2015 but consultations, roundtable events and internal reviews failed to lead to any actions to improve the experience of the public.

‘We are putting the Government on notice that we will be monitoring progress carefully. We look forward to reviewing progress on each of the pledges and our Committee has committed to a further evidence session in 12 months’ time to drive real change.’

Cllr David Renard, the Local Government Association’s transport spokesman, said: 'The LGA has long-called for the ban on pavement parking to be extended to all areas of England, with councils able to make exemptions, so we are pleased government has announced proposals to introduce this.'

The DfT pointed out that is also looking at possible options to streamline and digitise the process used to create restrictions such as temporary road closures for roadworks, special events or permanent changes to speed limits and parking restrictions, under traffic regulation orders (TROs).