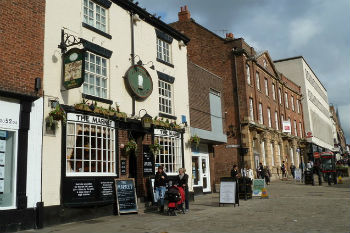 A northern borough council has approved a new multi-million pound scheme to create hundreds of jobs.

Chesterfield Borough Council has agreed to a revised version of the Northern Gateway scheme, which they argue will improve the town’s northern entrance and create 489 jobs.

The £19.9m project will be funded by a Sheffield City Region Infrastructure Fund grant of £5.83m and £3.5m from Chesterfield Borough Council.

The Sheffield City Region funding still requires a full business case to be submitted and signed off.

The remaining funds includes £10.5m of private sector funding which is for the redevelopment of the Co-op store by Central England Co-operative and their partners Jomast Developments.

Cllr John Burrows, Chesterfield Borough Council’s leader and cabinet member for regeneration, said: ‘We had to completely rethink our original plans for the Northern Gateway after the closure of the Co-op building and the change in the economy which meant that large food retailers were no longer looking to build large new stores.

‘But by working with the owners and developers of the Co-op building we are now able to deliver the restaurant and leisure aspects of the original scheme.’

‘The revised project is another example of how Chesterfield can benefit from gaining funding from the Sheffield City Region to deliver projects that will create jobs in Derbyshire,’ he added.

The original plan included proposals for town centre housing but these have been dropped.

‘We want to see more housing in the town centre area, but I think it is important that we press on with the revised plan first and then look at that again once this work is well underway,’ Cllr Burrows said.

‘But in is still very much a desire of ours to deliver more town centre housing.’