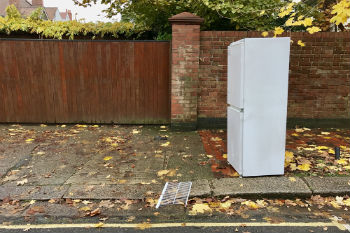 A Birmingham councillor has called on the Government to do more to tackle the issue of dumped fridges.

Cllr Majid Mahmood has written to Michael Gove asking the secretary of state for environment, food and rural affairs to consider making it a requirement for manufacturers to include the cost of proper and responsible disposal within the cost of appliances.

The cabinet member for clean streets, waste and recycling at Birmingham City Council said that last year there were 3,000 fridges dumped in the city.

If manufacturer and retailers included the cost of proper disposal in the cost of the appliance, the council would not have to spend money disposing of them, he argued.

‘The residents of Birmingham have told us that clean streets are their number one priority, so I urge the Government to seriously consider our proposal that manufacturers/retailers should include the cost of proper and responsible disposal within the cost of appliances,’ Cllr Mahmood wrote.

‘This would provide the purchaser with the opportunity to dispose of their fridge or freezer at no additional charge, and help save the city thousands of pounds in the process.

‘Last year alone we recovered and responsibly disposed of 3,000 dumped fridges – it is an unsustainable position and needs some innovative thought and leadership at a national level to help councils deal with this.’