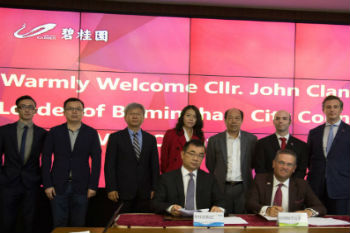 The leader of Birmingham City Council has declared his city is ‘open for business’ after signing a development deal worth up to £2bn with a Chinese company.

Cllr John Clancy signed with the agreement with property developers Country Garden during a week-long trade mission to China and Hong Kong.

The joint statement with the company will see the council and Country Garden work together on regeneration and investment projects around the HS2 high-speed rail project.

Country Garden will also be involved with various housing developments in Birmingham and the surrounding area, as part of the deal.

‘This agreement is about bringing good jobs and quality homes to Birmingham. Country Garden have a proven track record of building homes at pace and scale,’ said Cllr Clancy.

‘They have played a major role over the last 20 years, as housebuilders have met the massive demands of China’s rapidly expanding economy.

‘Bringing this level of investment and experience to Birmingham would be a massive economic boost to the region’s businesses, skills base and families,’ he added.

The founder and chairman of Country Garden, Yang Guoqiang, said: ‘I have been impressed with Birmingham’s ambition and huge potential and I am delighted to announce this investment commitment to support significant housing and infrastructure development in the city.’