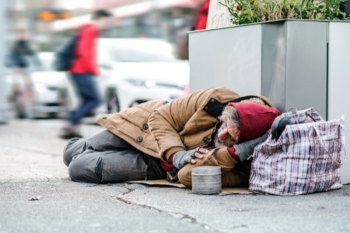 One in four people placed in emergency accommodation under the government’s Everyone In scheme are no longer being housed, campaigners have warned today.

Analysis by homeless charity Shelter also found over three-quarters (77%) of those helped under the scheme were not living in settled accommodation. It estimates this means 29,000 people were still not living in a settled home by February 2021.

The charity also found more than one in five (22%) rough sleepers were still living in emergency accommodation, such as hostels and B&B rooms.

Polly Neate, chief executive of Shelter, said: 'Everyone In helped thousands off the streets at the start of the pandemic, but our data shows almost one in four people are no longer being accommodated and many are still in hostels and B&B’s facing an uncertain future.

'We’re gravely concerned that with funding for Everyone In running out, and councils returning to ‘business as usual’, we will see people forced out onto the streets. It would be a travesty if we allowed rough sleeping to slide back to pre-pandemic levels. The Government needs to get a grip on this situation urgently and look at what comes next.'

An MHCLG spokesperson said: 'This analysis is misleading as it does not take into account those who have moved into supported housing or who have been reconnected with family and friends.

'The Everyone In programme has been widely recognised as a considerable success and as of January this year, 37,000 people are in safe and secure accommodation as a result of this effort, including 26,000 already moved into longer-term accommodation.'

Labour’s shadow housing secretary has called for more transparency around the performance of a key rough sleeping funding programme amid government secrecy.