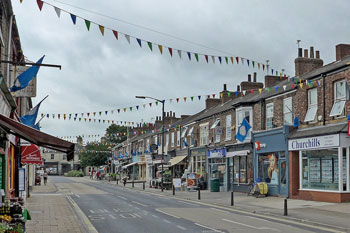 Bishopthorpe Road in York has been named as the best shopping street in Britain.

Judges in the Great British High Streets Award said Bishy Road - as it is known locally - was a great place to live, shop and work.

A record number of 230 high streets entered and nearly 200,000 votes from the public were cast across seven categories in the scheme run by the Department for Communities and Local Government.

At a prize ceremony in Admiralty House, London, high streets minister Marcus Jones said: 'Bishy Road fully deserves their title of Britain’s best high street and I congratulate them on their good work.

'We’ll be sharing Bishy’s top tips with other high streets across the country to make sure others learn from their success.'

Faulkner Street, Hoole was named as Best Newcomer in a new category.