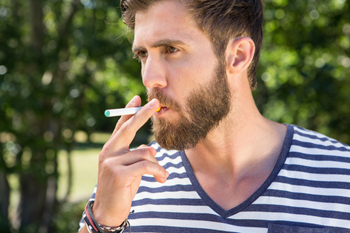 Smoking e-cigarettes could be banned in enclosed spaces and councils hit with new demands over local toilets under new Welsh public health laws.

Proposals would force local authorities to publish a strategy for local loos and explanation on how local demand for public toilets will be met.

Tighter rules on e-cigarette use would also outlaw their use in enclosed or substantially covered public and work places, bringing restrictions on their use in line with existing smoking laws.

If introduced, Wales would be the first part of the UK to introduce such legislation.

The plans also include creating a compulsory licensing system for acupuncture, body piercing, electrolysis and tattooing, alongside proposals to create a national register of tobacco and nicotine retailers for local authorities.

Consultation on a separate draft Bill on a new minimum unit price for alcohol is also expected before the summer.

Drakeford said: ‘Wales has a strong tradition of using legislation to improve public health and I am confident the measures in the Public Health Bill will continue this.

‘We want to get the balance right between all the things that would make a big difference to people’s health and wellbeing in the future while not wanting to intrude on the legitimate rights people have to run their own lives.’