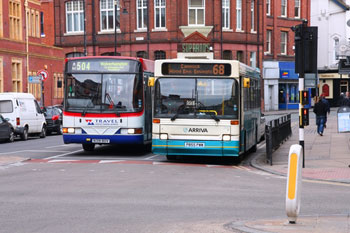 New research has revealed the underlying factors that best predict levels of bus use in local areas.

Published today by the Urban Transport Group, the study identified six conditions which, when combined, can be used to define what the report calls the ‘Intrinsic Bus Potential’ (IBP) of a local authority area.

IBP can be used to predict nearly 85% of the variation in bus use between local authorities and areas with a high IBP can be considered ‘good bus territory’.

The six conditions are:

The research, which was carried out by Transport for Quality of Life, identifies 25 local authority areas which ‘significantly’ out-perform their IBP. These include Hillingdon, Croydon, and Hounslow among others.

It notes, however, that other factors, such as a pre-existing culture of bus use and bus regulation, also contribute to local areas out-performing their IBP.

Stephen Edwards, the chair of the Urban Transport Group and executive director of South Yorkshire Passenger Transport Executive, said: ‘In an industry with such low levels of research and development, much of the debate about what’s behind bus patronage change has been based on assertion and opinion.

‘Our research programme has taken a more rigorous approach and this new, data-driven report shows for the first time the background factors that can best explain levels of bus use.

‘The report makes for sobering reading as it shows that even in some areas which are doing better than background conditions would predict they are still experiencing significant patronage decline.

‘These findings also demonstrate that without reformed and increased funding for services, it is highly likely that bus use will continue to fall and it will be difficult for areas to achieve – still less to exceed – their potential for bus use.’