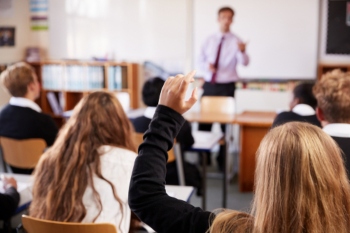 The number of pupils in class sizes over 31 has increased substantially over the last five years, new research has revealed.

Analysis by Labour has found that over the last half decade the number of secondary pupils in class sizes of 31 or more increased by over 130,000, an increase of 43%.

The analysis of figures from the House of Commons Library also learnt that the number of primary school pupils in class sizes of 31 or more has increased by nearly 20,000, or 3.7%.

Kate Green, Labour’s shadow education secretary, commented: ‘The Conservatives have turned back the clock on education, reversing twenty years of progress to reduce class sizes and ensure every child gets the dedicated teacher attention they need.’

Labour’s research also revealed that the number of secondary pupils in classes of 31 or more has increased since 2010 from one in 10 to almost one in seven pupils.

The number of primary pupils in classes of 31 or more has increased since 2010 from one in nine to one in eight pupils.

A Department for Education spokesperson said: 'Average secondary class sizes remain low, at only 22 pupils, while the average primary class has remained stable at 27 pupils., This is despite an increase of almost 800,000 pupils since 2010 which is more than ever before.

'Last year most pupils were offered a place at one of their top three choices of secondary school, while between 2010 to 2019 we created one million additional school places overall, with many more in the pipeline.

'We know disadvantaged students have been most heavily affected by the pandemic so we are targeting the majority of our £1.7bn catch-up plans towards those most in need, We have also appointed Sir Kevan Collins as the Education Recovery Commissioner to oversee a long-term plan to tackle the impact of lost learning.'