Poverty and the digital divide 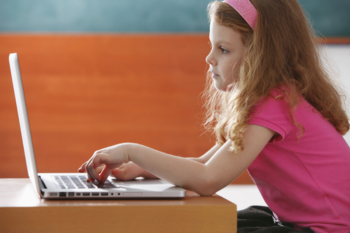 The effects on children of living in poverty are malign and wide-reaching, but possibly the most damaging is the impact on their future. According to Department for Work and Pensions data, 30% of British children were living in poverty in 2016-17, a statistic that only scratches the surface of families trapped in a cycle of impoverishment that doesn’t just affect children’s health, but their literacy and communication skills as well.

A 2017 study by Education Data Lab found that children who are eligible for free school meals throughout their time in school see a drop in attainment of 8% in primary school, rising to 13% by the time they reach their GCSEs, when compared to children who have never been eligible.

According to the report, attainment by this particular group of children – the long-term disadvantaged – is actually declining, despite the government’s introduction of the pupil premium.

Poorer children fall behind in schools due to a myriad of reasons, but for some it’s simply matter of resource. A study this year by uSwitch found that internet access is now required for about half of all homework set, with 69% of parents believing the internet is essential to their child’s education.

However, digital skills and access are at their lowest in the poorest households. Homes in the C2DE socio-economic categories show the lowest levels of home broadband use and device ownership in the country, according to the government’s 2015 Basic Digital Skills report. In fact, Ofcom statistics from this year show that working-age people in DE homes are three times as likely to not have access to the internet as others.

The subject of home internet access is not commonly addressed in local authorities’ digital strategies, where the focus is generally on the transformation of their own services and improving the digital skills of their residents. However, with approximately one in 12 GCSE students without a permanent internet connection at home, it’s likely that 2-3 children in every classroom are struggling to complete the work asked of them as a result. Of course, schools and libraries do have PCs available for this reason, but research by NFU has found that children with regular internet access do significantly better in their GCSEs, improving their grades by up to 25%.

Of the major internet service providers, only BT has a dedicated package to help those on benefits or living in social housing to get basic internet access, but with a data cap of 12GB per month and penalties for using more, there is little incentive to make the most of the digital world.

Jake Berry, Conservative MP for Blackburn and Darwen, has argued that literacy, numeracy and aspiration could all be improved by enabling social landlords to provide free broadband access for their tenants.

This has begun to take shape, with Hyde Housing Association in London and Leeds City Council both trialling free internet for their social housing tenants in the last two years. In the Leeds trial, which was conducted in partnership with 6G Internet, 160 social housing residences were connected to free broadband, with approximately a third of residents going on to use it on a daily basis.

For private companies, the question here is how to deliver these services in a sustainable way - shareholders are unlikely to get excited at the idea of providing something for free. In 2008, Bill Gates called on companies to develop solutions to social problems through ‘creative capitalism’, which is what we’re trying to do at 6G Internet.

Our answer is to dedicate 20% of our network to social causes, including free basic broadband for people living in social housing and an offer for families with children eligible for free school meals to access four hours of high speed, unlimited internet every day. Our hope is that this will help not just with school attainment, but provide an opportunity to access every positive aspect that being online provides.

Phil Walker is director of finance at 6G Internet

This feature first appeared in Local Government News - click here to register for your free copy.