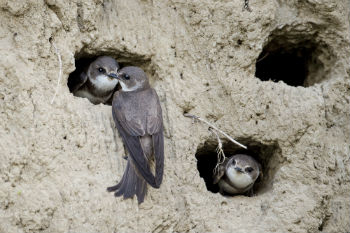 A council in North Norfolk has instructed contractors to remove sections of bird netting after images of a distressed Sandmartin went viral.

North Norfolk District Council has agreed to remove the upper levels of netting on Bacton cliffs in order to prevent migrating birds from getting caught.

The netting was in place to discourage birds from building homes in the cliff face which, the council argues, contributes to coastal erosion.

However, after a video of a Sandmartin caught attempting to enter its nest went viral, the council has agreed to take down some of the netting.

1/2 After positive discussions with @Natures_Voice, we have instructed contractors to remove upper levels of netting at Bacton cliffs. Minimum levels will be retained to assist in progressing with this critical project to protect people’s homes and national infrastructure

Debbie Tann, chief executive of Hampshire & Isle of Wight Wildlife Trust, commented: ' Netting seems to be an increasingly common practice and it is a depressing sight that can lead to birds and mammals becoming trapped or tangled up.

'If works impacting nesting habitats are shown to be absolutely necessary, they must be done well outside of the bird nesting season, meaning netting isn’t needed.'