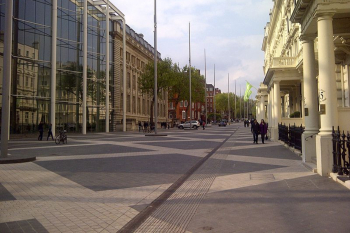 The average speed of vehicles using a shared space in London has increased by 5mph over the past six years, new figures have revealed.

The statistics show that the average speed of vehicles using Exhibition Road is now 27mph, up from 22mph in 2013.

Lord Holmes, who published Accidents by Design in 2015, is calling on the Government to investigate if there is a connection between the removal of pedestrian crossings and an increase in speeding vehicles.

Lord Holmes said: ‘I have been arguing for years that removing controlled crossings and pavements and forcing toddlers and tankers, buses and blind people to “share” the same space is an absolute disaster.

‘To now learn that the average speed of vehicles along Exhibition road has increased to a lethal 27mph is absolutely shocking.

’I am calling on the government to investigate the connection between this deadly street design and increased vehicle speeds and also why speed limits are not being enforced.’