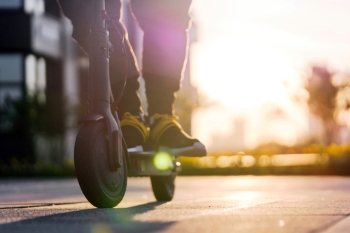 The pilot scheme, a joint initiative of Liverpool City Region Combined Authority and Liverpool City Council, has seen the Sweden-based e-scooter company Voi brought in to provide the city with around 50 electric scooters.

To date, there have been more than a million journeys taken on the carbon-neutral vehicles, according to the combined authority and the city council.

However, more than 1,000 people have been handed seven-day bans for antisocial riding.

In a joint statement, Liverpool City Council and Liverpool City Region Combined Authority said: ‘Understanding safety is of vital importance in this trial scheme and we’re working closely with Voi, Merseyside Police as well as with local hospitals and public health leaders to track, respond and learn from any issues as these arise.

‘The data released on temporary bans reflects the work being undertaken to clamp down on the small number of individuals in Liverpool who misuse the e-scooters.

‘In addition, a number of other measures have been recently rolled out to help ensure the e-scooters are being used safely and properly, including mandatory parking zones and reduced hours of operation during weekends.’