Immigration policies made ‘in the dark’, committee warns 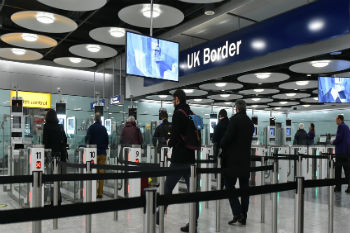 Immigration policies are being formulated ‘in the dark’, committee warns as it criticises the quality of the migration data the Government bases its decisions on.

The Lords Economic Affairs Committee has warned Whitehall will struggle to control immigration post-Brexit unless ‘major improvements’ are made to the quality of migration data upon which it relies.

‘The Government must have reliable statistics on migration before it formulates new policy, otherwise it will be making crucial decisions — of vital importance to the country's businesses — in the dark,’ said committee chairman Lord Forsyth of Drumlean.

The committee’s report into Brexit and the labour market describes the International Passenger Survey (IPS), which calculates the number of immigrants and emigrants (and therefore the net migration figure), as ‘unreliable’.

The IPS, carried out by the Office for National Statistics (ONS), is based on data collected through interviews with passengers at 19 major and regional airports, eight ports and the Channel Tunnel rail link.

The sample size is too small to be representative and certain groups are underrepresented in the sample, the committee said. It also has a large margin of error.

The committee’s report urged the Government to use information relating to the economic activity of immigrants – such as paying tax or receiving benefits – to gain a clearer understanding of how long migrants stay in the UK.

It also recommended Whitehall explore how information from exit checks can be combined with other information in order to address the unreliability of the IPS. It also called for a better way of accounting for the departure of international students.

The committee warned against the Government’s plans to cut net migration to below 100,000 annually. It said using a strict annual numerical target risks causing disruption to businesses and the economy.

It also called for an ‘implementation period’ when EU workers can be employed easily, a policy it said was particularly important for sectors with a high turnover of staff, such as social care and nursing.

‘It will take companies time to adapt their business models to be less dependent on EU workers and an implementation period is essential to ensure a smooth transition,’ said Lord Forsyth of Drumlean.

‘Businesses will have to accept that immigration from the European Union is going to reduce and adapt accordingly.

‘All these options may lead to higher prices for consumers.’

‘The Committee's 2008 report on immigration warned that the employment of migrant workers could lead to businesses neglecting skills and training for British workers,’ he continued.

‘As the recruitment and retention problem in the nursing sector highlights, these fears have been realised and training for the domestic workforce needs urgently to be given a higher priority.’