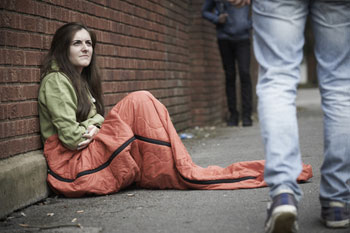 The housing benefit freeze has put private renting out of reach for most low-income tenants and risks forcing people from their homes, a housing standards group has warned.

New research from the Chartered Institute of Housing (CIH) has found that more than 90% of Local Housing Allowance (LHA ) rates across Britain now fail to cover the cheapest rents.

LHA, a housing benefit for private renters, was introduced to cover the cheapest 30% of homes in any given area.

However, the Government froze LHA rates in 2016 and they have not been increased in line with local rents since April 2013. This has left many low-income households struggling to pay their rent.

CIH’s research found renters were facing ever-increasing gaps between their LHA rates and their rent. These range from £25 a month on a single room in a shared home outside London to more than £260 a month on one to four-bedroom homes in some areas of London.

The Government introduced targeted affordability funding in 2014 to bridge the biggest gaps but CIH’s new report has found that its impact has been negligible.

‘Our research makes it clear just how far housing benefit for private renters has failed to keep pace with even the cheapest private rents,’ said CIH chief executive Terrie Alafat.

‘We fear this policy is putting thousands of private renters on low incomes at risk of poverty and homelessness.

‘We are calling on the government to conduct an immediate review and to look at ending the freeze on Local Housing Allowance.’

Matt Downie, director of policy and external affairs at the homelessness charity Crisis, commented: ‘This report highlights just how much housing benefits for private renters are falling short of the levels needed, leaving many homeless people stuck in a desperate situation and putting yet more people at risk of homelessness.

‘There are 236,000 people across Britain experiencing the worst forms of homelessness – this includes those sleeping on the streets, living in unsuitable hostels, and sofa-surfing. In many of these cases, people simply can’t find a home because there isn’t enough social housing and housing benefits are too low to cover private rents.

‘Homelessness is not inevitable – there is clear evidence that it can be ended with the right policies in place. The Government must urgently reform housing benefits for private renters, so they not only match the true cost of renting but also keep pace with future rent changes.’