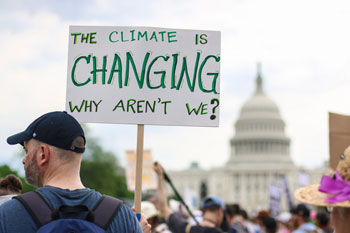 A new report from Centre for Cities has revealed that half of the city council leaders and directly elected mayors who took part in the think tank’s survey cited tackling climate change as a top priority.

An example of what Centre for Cities calls the ‘Greta Effect’ – a reference to the environmentalist Greta Thunberg –, this increase marks a dramatic jump from just 5% of urban leaders last year.

Despite the rise in concern about climate change among local leaders in cities, the survey reveals that they are sceptical of the willingness of national politicians to take action on the issue.

Almost half (41%) cited deficiencies in national Government as an obstacle.

Eight in 10 (81%) urban political leaders said they would be willing to spend significant extra capital on combating the climate emergency if it were provided by central Government. Even more (94%) of them would allocate extra money from Government to public transport investment.

An overwhelming majority (75%) of the local leaders polled are encouraging the public to ditch cars in favour of cycling and walking, and over half are transitioning to more environmentally friendly council-owned vehicles.

The report also found that less than one in 10 city leaders think the Government’s support for cities is good, and over half of them expect Brexit to damage their city’s reputation and make it harder to recruit international workers.

‘Cities account for the majority of the country’s population and jobs but there is a concern in city halls that the urban agenda is being side-lined,’ said Andrew Carter, the chief executive of Centre for Cities.

‘If cities are going to lead the way on important issues such as climate change then the next Government should give them the power and resources that they need.

‘The leaders of Britain’s largest cities still have less powers than their counterparts in New York, Tokyo and Berlin. The next Government should correct this inequality.’

Joanna Rowelle, integrated city planning director at Arup commented: ‘From improving air quality and public transport, to increasing affordable housing and employment opportunities as well as tackling climate change, this survey shows that our urban leaders are prepared to shoulder more responsibility in taking on the most pressing issues facing their communities.

‘It is encouraging to see the climate emergency ranked among the most important issues for British cities – but we also see significant barriers to action. These need to be urgently addressed.’