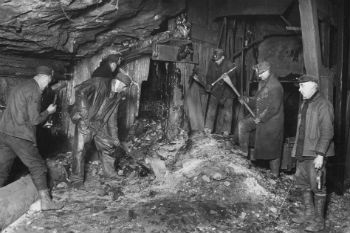 A Derbyshire council has joined a growing band of local authorities in condemning the home secretary’s decision not to hold an inquiry into police brutality during the 1984 miners’ strike.

Amber Rudd announced last October she would not open an inquiry into the policing of picket lines at the Orgreave coking plant, despite an Independent Police Complaints Commission report which cites evidence of excessive violence by police officers, perjury and an apparent cover-up.

The controlling labour group at North East Derbyshire has described Ms Rudd’s decision as ‘appalling’ and called on her to ‘think again’.

‘Frankly her decision not to hold an inquiry into what happened at Orgreave is appalling,” said council leader Graham Baxter.

‘It shows total contempt for the many former miners, their families and communities in our area who have waited patiently for decades for the truth, especially for those who were at Orgreave that day.’

‘Many of the 95 miners who were beaten unconscious or seriously injured by the police on 18 June 1984 then arrested and charged with riot offences, but later acquitted, were from communities in our area,’ continued Cllr Baxter.

‘By refusing to look into what really took place that day the Home Secretary fails to recognise the impact her decision has had on many of our residents who continue to feel they’re being denied justice.’