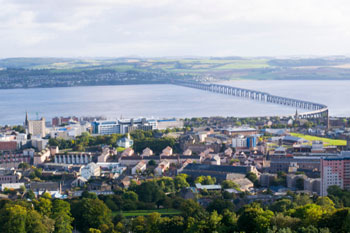 A new funding package worth £150m has been agreed by four councils in the Tay Cities region of Scotland.

He said it will bring together public, private and voluntary organisations in Angus, Dundee, Fife and Perth & Kinross to deliver a 'smarter and fairer region'.

Funding from the UK Government will be used for a range of projects including rural broadband, tourism, cyber security and energy.

Mr Mundell said the UK government had invested more than £1.1bn in city region deals in Scotland which were already producing results.

Announcing the new deal with representatives of the Scottish government, leaders of four local councils and with business and academic chiefs at Perth & Kinross Council's office, he said: 'The UK Government’s Tay Cities Deal investment will deliver a transformational boost to the region’s economy.

'The impact of the £150m funding package will be felt across Dundee, Fife, Angus and Perth and Kinross.

'But this is only the start. The real work starts now to deliver these exciting projects - so it’s vital the partners and Scotland’s two governments work together to realise the deal’s amazing potential.'