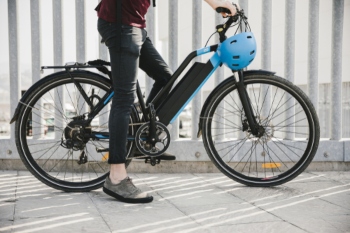 Over 100 million car and taxi trips made in city regions could be replaced by e-bikes if the Government meets its targets on getting more people to cycle, a new report said.

The report, by consultants Steer for the Urban Transport Group (UTG) looks at how the use of e-bikes can be increased to shift mode use from the car, deliver substantial carbon savings, and reduce congestion.

It found that if the Government is able to deliver its target for mode shift to cycling, e-bikes would account for a third of all cycling trips in in the seven core city regions.

This would replace 103 million car and taxi trips annually across the city regions, and provide around £280m annually in monetary benefits.

Ben Still, managing director of West Yorkshire Combined Authority and lead board member for active travel at the Urban Transport Group, said: 'These scenarios paint a positive picture of what is possible for e-bikes. They tell us the portion of cycle trips that could be made by e-bikes if Government meets its target on shifting people to cycling, and the number of car and taxi trips which could be removed from our roads.

'E-bikes have unique appeal, enabling longer and more frequent cycle trips, and they can thrive in certain demographics, such as older people, or certain geographies, like hilly or congested towns and cities. E-bikes therefore need to be centre stage of Government’s active travel policy if we are to get more people cycling in our city regions.'