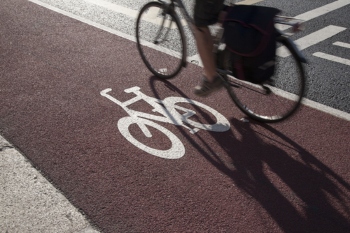 However the money, which was previously labelled 'emergency cash', now comes with stringent conditions attached.

Mr Shapps has continued to send mixed messages over local authority schemes to improve walking and cycling, imposing a new layer of bureaucracy on authorities receiving the cash.

Department for Transport (DfT) officials warned: ‘If these conditions are not met by a council, the Transport Secretary has been clear that future funding allocations will be reduced and claw-backs could also be imposed.’

But in the face of vocal and well publicised opposition to some council schemes, the DfT also pointed out that surveys and independent polls have shown strong public support for ‘high-quality schemes’

Officials said councils ‘will receive funding based on how well they have complied with the criteria set out by the Transport Secretary in July’.

However, in an implicit admission that previous guidance may not have been adequate, the DfT said that ‘to help councils implement better schemes, updated guidance, which has also been released today, emphasises the need for practical and pragmatic solutions’.

Mr Shapps has previously come under fire for inconsistency on the issue, including criticising council’s use of the first tranche of cash under what was previously the Emergency Active Travel Fund, even though they were asked to draw up schemes quickly according to guidance issued in May and largely did so.

Announcing the new allocations, which are for longer-term improvements, he said: ‘It has been great to see so many people build cycling and walking into their daily travel habits. To support them, we know it’s vital to have the right infrastructure in place so everyone – cyclists, pedestrians and motorists – can use our roads.

‘Whether you’re walking, cycling, driving or using public transport, people must have the space they need to get around safely.’

London boroughs and Transport for London received the largest share of the cash with £20m with Greater Manchester Combined Authority getting £15.8m.

Paul Tuohy, chief executive of Campaign for Better Transport, welcomed the cash, but said:'Our transport habits are at a crossroads right now: we must steer away from a future of congestion, pollution and rising carbon emissions. Instead of planning for ever-more car journeys we should invest in walking, cycling and good, affordable, low-carbon public transport.'

Local government and the challenges faced when obtaining insurance