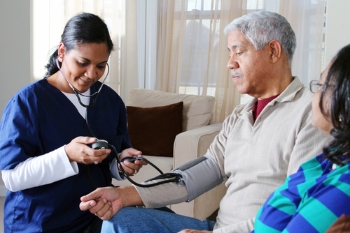 The pandemic has undone a decade of improvement in life expectancy, a health think tank has warned.

Data from the Office for National Statistics (ONS) on life expectancies in local areas across the UK has revealed that the average life expectancy for both men and women has receded to levels they were at in 2010.

In Wales, male and female life expectancy at birth saw non-significant reductions between the same periods.

There were also significant reductions in male life expectancy in 2018 to 2020 compared with 2015 to 2017 in most English regions, according to the ONS.

Large falls in male life expectancy at birth occurred in the North East (16.7 weeks) and Yorkshire and The Humber (16.2 weeks). For females it significantly reduced in the West Midlands (9.9 weeks), but significantly increased in the South West (17.7 weeks).

The ONS observed a continued improvement in life expectancy in the South West with lower excess deaths and lower mortality involving COVID-19, compared with other regions of England.

Commenting on the ONS’ findings, David Finch, assistant director of Healthy Lives at the Health Foundation, warned that the pandemic had undone a decade of improvement in life expectancy.

‘While we would hope to see some bounce back in life expectancy as the country recovers from the pandemic, there is a risk that, without a focus on improving health, we will return to the slow progress we saw in the 2010s,’ he said.

‘Today’s data also provides further evidence of growing differences in health between local areas with gaps between the best and worst areas expanding for both men and women.’

Mr Finch continued: ‘Speaking in Blackpool last week, the health secretary outlined a vision for a healthier and fairer society. But today’s data shows there’s a mountain to climb to deliver this in the wake of the pandemic.

‘The pandemic recovery must be led by investment in people and communities – in health, housing, skills and education – along with a safety net to protect the most vulnerable. It is, therefore, concerning to see policies such as the planned cut to Universal Credit which will impact the poorest and sickest the hardest.

‘The health secretary has acknowledged that levelling up health is fundamental to levelling up the economy but, without a realistic strategy for improving health and the investment needed, “levelling up” is likely to remain little more than a slogan.’