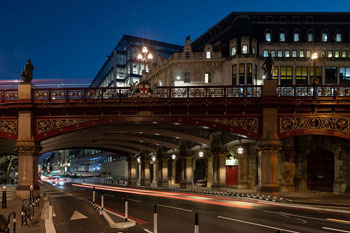 Designed by city surveyor William Haywood, Holborn Viaduct (otherwise known as Farringdon Street Bridge) was constructed between 1863 and 1869. Opened by Queen Victoria, its purpose was to provide a level connection between Holborn Circus and Newgate Street.

The original lanterns, powered by the world’s first public electricity supply, were most likely lost during the Second World War, when both north bridge pavilions were destroyed. Since rebuilt in replica. Until recently, modern lighting, above shop entrances provided the only light to the highway under the bridge.

DW Windsor worked closely with TfL and the City of London to agree and install traditional globe lanterns, echoing the style of the original luminaires and bridge architecture, which is now grade II listed.

? Replicate design, style and colour of the original lanterns, in keeping with the bridge’s Victorian heritage
? Utilise LED for energy efficiency

DW Windsor were asked to replicate the original lanterns based on a copy of preserved blueprints. The proposed design imitates details of the original filigree, with a shortened stem to reduce windage.

The appealingly simple spherical form of the Polar luminaire, by DW Windsor provided the foundation of the replica lanterns. With ornate gilded infills added to the brackets and luminaire to echo the original design. Further metal work was finished in RAL 3004, to coordinate with the bridge. An opal polycarbonate cover was selected to help diffuse light within the upper hemisphere of the lantern, whereas the lower bowl is a clear polycarbonate to maximise light output, where needed, on to the road and pavement.

Minimising the structural impact of the luminaires on the bridge, the lanterns are clamped. With a warm white 2700K colour temperature specified to provide a golden hue, much like the effect of the original gas lighting. The scheme was installed in 2017 and the lighting was inaugurated in early 2018.