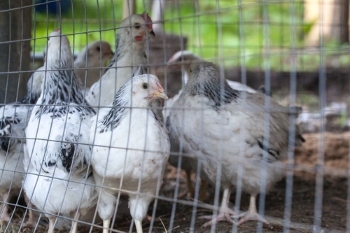 A one kilometre restriction zone has been set up around a poultry farm in Tarporley as Cheshire West and Chester Council responds to an outbreak of Avian Flu.

Workers at the site raised the alarm when they noticed birds becoming unwell. Test results subsequently revealed the animals had a strain of avian flu that is a low pathogenic case – this means it is less likely to cause death in the birds and is difficult to spot.

Working with the Department for the Environment, Food and Rural Affairs (DEFRA), the Animal and Plant Health Agency (APHA), Public Health England (PHE) and other partners, the council quarantined the farm, which houses approximately 4,500 birds.

The council has reported that birds are currently being culled to ensure no further spread. Cheshire West and Chester director of Public Health, Ian Ashworth, said:

‘We are working closely with Public Health England and other partners on this incident.

‘The risk to public health from the virus is very low and avian influenzas pose a very low food safety risk. We are working locally to support residents, local business and premises that may be affected.’