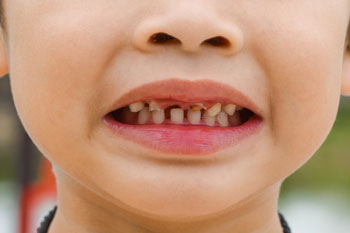 The Local Government Association says the figures – up by 18% in the past six years – are likely to reflect the excessive consumption of sugary food and drink as well as poor oral hygiene.

They cover tooth decay which is so serious the extraction has to be undertaken in a hospital under general anaesthetic rather than a dentist.

The LGA has long called for the measures to reduce sugar intake, such as reducing the amount in soft drinks and introducing teaspoon labelling on food packaging.

It has also demanded to have a say in deciding where revenue from the soft drinks levy – which has raised £154m since its introduction earlier this year – is spent.

It says the Government must reverse the £600m in reductions to councils’ public health grants which they use to fund oral health programmes and tackling childhood obesity.

Ian Hudspeth, chairman of the LGA’s Community Wellbeing Board, said: 'This trend shows there is a vital need to introduce measures to curb our sugar addiction which is causing children’s teeth to rot.

'There must be a reinvestment in innovative oral health education so that parents and children understand the impact of sugar on teeth and the importance of a good oral hygiene regime.'

£39168.0 - £47405.0 per annum + Plus Excellent Benefits Package
To hold and sustain a caseload consisting of the most sensitive, "complex and difficult" cases to which the post holder can bring to bear the highest standards of professional ability and a considerable depth of knowledge in relevant legislation in policy England, Essex, Chelmsford
Recuriter: Essex County Council

£19,171 to £19,945 pro rata
As our Chef Manager you will be responsible for delivering a customer-focused, exciting and healthy catering service, operating to... Scarborough, North Yorkshire
Recuriter: North Yorkshire County Council