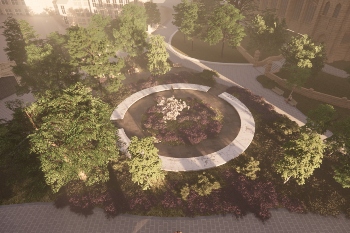 A ‘calm and peaceful’ memorial for the 22 people who were killed in the 2017 Manchester terror attack has been approved by the council.

Manchester City Council said the Glade of Light was designed to be a living memorial that provides a tranquil garden space for remembrance and reflection.

A white stone ring ‘halo’ bearing the names of those who lost their lives in the attack, with personalised memory capsules, would form the centrepiece of the scheme

Sir Richard Leese, leader of Manchester City Council, said: ‘This memorial at the heart of our city promises to be a beautiful tribute to those whose lives were so cruelly cut short on 22 May 2017. Their memories will endure and Manchester will never forget them.

’The Glade of Light will become part of the fabric of our city, a calm and peaceful place which will blend seamlessly with the regeneration of the wider Medieval Quarter in which it sits.’