Challenging the false dichotomy between conservation and development 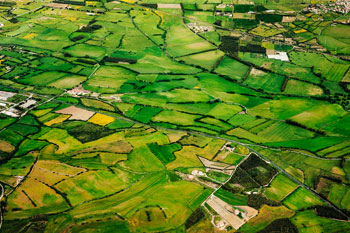 A recent survey of ward councillors found that 58% of respondents said they thought it was ‘likely’ or ‘very likely’ Green Belt land in their areas would be allocated to housing development in the next five years. This is an increase from 51% of respondents to the same question four years ago.

The Local Government Information Unit (LGiU), which carried out the survey of 1,200 councillors on behalf of the National Trust, reported those who took part registered their ‘concerns’ about Green Belt release and the general loosening up of the planning system.

While the LGiU did not specify the exact content of these ‘concerns’, it seems reasonable to assume some of them revolved around how environmentally sustainable it is to build on land designated as part of the Green Belt. This is understandable. It is a position based on the longstanding assumption that the Green Belt is ‘green’, i.e. ecologically rich, and built up areas are environmentally poor.

Ben Kite, managing director of the ecological consultancy EPR, wishes to challenge this assumption. ‘I think part of the problem is people mistakenly read into the Green Belt things that it’s not meant to be and not meant to do,’ he explains. ‘They wrongly presume it’s a designation that infers some kind of ecological or landscape value that’s covered by it.’

The reality is, he argues, the Green Belt is ‘overwhelmingly brown’. It has swaths of intensively managed farmland within it that has little in the way of ecological richness. Furthermore, he says, many of the areas that have some existing ecological value are privately owned and ‘largely neglected from a biodiversity enhancement point of view'.

Mr Kite, who advises councils on how to come up with local plans which benefit nature conservation in addition to delivering housing, believes it is time we stopped viewing development in binary terms. Sustainable development is not an oxymoron. And this is important when it comes to the Green Belt. It is perfectly possible, he says, to build on it in a manner that benefits the environment.

Essentially, Mr Kite argues, by taking a strategic approach to developing select sections of Green Belt designated land, local authorities would be able to raise the funds to pay for making the Belt greener.

‘A lot of the Green Belt isn't green and if only money was available to fund nature conservation and enhancement projects then you could make the vast majority of the Green Belt much better at the expense of only a small amount and achieve housing delivery goals as a consequence.’

He suggests there is a lot of potential for development on the inner edge of the Green Belt - the part bordering urban developments. Close inspection of these areas frequently reveals places that are ecologically ‘very poor places’, he says. It does not make sense to leave them be just because of Green Belt legislation that was first formulated in the 1940s.

Plus neglect of these ecologically poor areas simply forces developers to build in less sustainable places, which are miles away from service centres. ‘A potentially perverse outcome of the Green Belt is that they're forcing development in less sustainable locations that are just less constrained,’ Mr Kite explains. ‘I think a strategic view of the Green Belt could modify the parts of the countryside that are covered so development is being directed to sustainable locations close to service centres and money collected from development is used to fund significant major conservation projects.’

The mutually beneficial relationship between urbanisation and the natural environment is a favourite theme of Mr Kite’s. He says that rather than planning departments viewing ecological features of value - whether in the Green Belt or outside it - as a potential constraint on development, they should ask: ‘What could development do to drive and fund improvements in those places?’ ‘That might help to change the dynamic and the resistance that development faces,’ he argues.

This more nuanced approach could also help to bring people closer to nature. The sharp divide between ‘nature’ and ‘man’, encouraged by the idea that cities are here and the environment is over there in the Green Belt, is unhealthy.

Access to rich, complex, biologically interesting land is important, explains Mr Kite. ‘Part of my job is to do with reconnecting people with their natural environment and trying to reverse this apathy and disconnection that you see reported quite often in the press: people not feeling an affinity with nature and not being able to identify simple plants, for example. And as a consequence missing out on the very real health benefits the natural environment provides.’ Environmentally conscious develop could achieve this.

Despite his enthusiasm, he does sound a note of caution. This cannot be a carte blanche for building all over the Green Belt. ‘Any Green Belt review should aim to identify those areas that have residual value and make sure they’re not included in any land that is put forward for development,’ he says. ‘If it’s well thought out and considered and properly evidenced then it could be very positive, I think.’

Read our previous feature asking: Is protecting Green Belt land from development an outdated notion or does it still have a role to play in modern Britain?