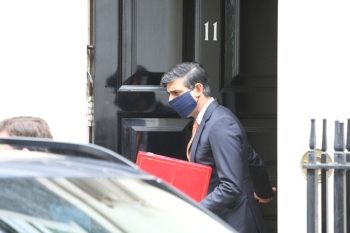 Business rates reform is set to be delayed again as the Treasury grapples with its mammoth issues around public spending.

The Treasury has promised an era of 'strong public services' in a Budget that has been bolstered by an economy that performing better than the forecasts predicted.

Plans to reform the rates system were out to consultation until last September, after years of delay to the ‘broken’ tax. While it was hoped that the outcome of the review may sit alongside today’s Budget and Spending Review, a decision appears to have been pushed back again.

The Government’s long-awaited White Paper on Levelling Up – which has also been pushed back several times in several guises – has also been shunted forward, originally to next week but sources now suggest it could be further delayed.

Chancellor Rishi Sunak will have to balance the need to fund local government – which was originally due to shift to a system where it was fully funded by council tax and business rates – against the needs of the business sector, particularly retail and hospitality, which have been hard hit by the pandemic.

Several of the announcements due to appear in today’s Budget and Spending Review have already been heavily trailed – leading the Speaker of the House of Commons Sir Lindsay Hoyle to chastise the Chancellor for telling the press in advance of his speech to Parliament.

The Spending Review is expected to focus around the priorities laid out in the Conservative Party Conference speech, on levelling up and creating a high wage, high skilled economy.

The Chancellor is expected to announce a pay rise for public sector workers and an increase in the minimum wage. There will be a £3bn post-16 education pot as part of the promised ‘skills revolution’ that was also promised at the Conservative Party Conference.

But when it comes to levelling up the transport system, the £6.9bn pledged to improve regional transport links at the weekend is predominantly old spending commitments that have been previously announced.

In September, Mr Sunak announced a 1% rise in National Insurance to pay for health and social care, with the cash initially earmarked to pay for the backlog in NHS services. Now the Treasury is expected to hand a further £5.9bn to the NHS to help further with the backlog and to invest in digital technology, while councils are expected to be allowed to raise council tax by up to 5% to help cover care costs.

A further £5bn is expected for health R&D. Early years support is also expected, with a £500m fund for family hubs.

And councils are set to benefit from £1.8bn to help build homes on brownfield sites.

Overall, the chancellor is likely to have good news to deliver, with the UK economy performing more strongly than expected. The Office for Budget Responsibility’s figures are expected to show the fastest growth in GDP for almost 50 years, with growth forecasts expected to rise from 4% to 6%.

While the OBR forecast public borrowing of £234bn in 2021-22 in March, the Institute for Fiscal Studies expects that figure to drop to £180bn.