Wigan town centre to be transformed by £60m scheme 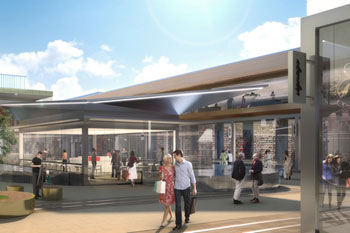 A £60m plan to transform Wigan town centre has been given the go-ahead.

The privately-funded scheme to modernise the Galleries shopping centre into a modern retail destination including space for a cinema, gym, restaurants and leisure complex has been approved by Wigan Council.

The plans also include re-establishing the town’s old street pattern and moving Wigan Market to Market Street, where it was originally located.

The developers, Vale Retail, plan to rename the Galleries the Makinson Quarter and spend £60m on plans to revitalise a major part of Wigan town centre.

The council says the shopping centre will be remodelled to create larger units needed by today's retailers and will create 400 jobs.

In the meantime Market Place in the town centre is set for a council-funded £1.3m makeover next year to enable it to hold large events.

Wigan Council deputy leader Cllr David Molyneux said: 'I’m delighted councillors on the planning committee have agreed with our officers that this is a wonderful opportunity for Wigan and one not to be missed.

'That a private developer wants to invest such a large sum of money into the town centre is a tremendous vote of confidence in Wigan.

'This will provide a big boost to the local economy and demonstrates the huge potential of this area.'

Richard Waterfield, chair of Waterfield’s Bakery and the Wigan Forward Board, the private/public partnership that works to promote the borough’s economy, said: 'These are exciting times for Wigan town centre.

'We all know the economic climate is tough and changing retail habits are having an impact on the high street.'

Up to £92,681 plus market supplement and relocation allowance (subject to terms and conditions)
We have developed an environment where learning, development and practice improvement are underpinning principles service wide. Birmingham, West Midlands
Recuriter: Birmingham Children's Trust

£30,500 to £34,797 per annum
Looking to recruit an Occupational Therapist who is able to meet the needs of children and young people with... York, North Yorkshire
Recuriter: City of York Council