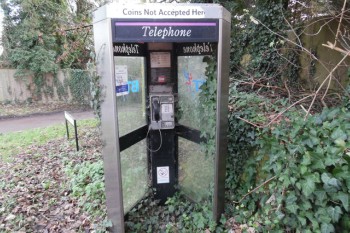 The council has received applications for 300 new boxes in two years and rejected 170 of these — a time consuming and costly process.

Historic planning rules treat phone boxes as ‘permitted development’ and so planning permission is not required, which makes it difficult for councils to reject them.

Westminster CC has over 1,000 phone boxes and last year the council conducted a survey which revealed many of these were neglected, out of service and/or disused.

The council has now received applications from BT for a further 99 new structures incorporating advertising screens as well as telecommunications equipment.

The authority has previously called for a change rules that would enable the council to require the removal of underused or redundant boxes and greater powers to resist new ones.

‘Arcane planning rules have left the council playing a never ending game of whack-a-mole with the phone boxes popping up across the city,’ said the cabinet member for planning and public realm, Richard Beddoe.

‘We have had some success refusing and removing these monstrosities but telecoms companies can see the opportunity to make a quick buck and the applications keep pouring in.

‘These aren’t the popular, historic red boxes we all love but ugly oversized advertising structures posing as telephone boxes cluttering our iconic streets.

‘We need Government and Ofcom to act urgently and prevent councils from facing a constant stream of expensive, lengthy planning battles.’

A sample of 12 council areas showed a combined rise of 927% in applications for telephone kiosks under permitted development rules between 2015 and 2017.