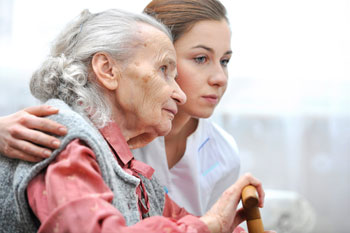 Staff in the care sector, who need to self-isolate, shield or have the virus, have told Unison they’re being forced to take unpaid leave or survive on minimal statutory sick pay (SSP).

Unison warns that a ‘significant number’ of care workers have no choice but to carry on working against public health advice because they can’t afford time off, increasing the risks of spreading the virus at work and to their family.

Ministers must make sure care staff who need to take time off or reduce their hours don't lose out financially and feel compelled to work whatever the cost, says the union.

Unison wrote to health and social care secretary Matt Hancock calling for the Government to ensure that financial aid intended for care staff actually reaches them and isn't kept by employers to cover costs.

But the response from care minister Helen Whately makes clear that cash-strapped councils will have to absorb the financial burden of monitoring and enforcing the distribution of the funding.

Unison says the potential costs of doing this mean it's unlikely local authorities will have the resources to pursue employers who don't pass on the cash to their staff.

The union’s research has revealed that pay arrangements for care workers who take time off while ill, isolating or shielding differ wildly.

Situations reported by workers include being paid just 10% of their usual salary; receiving sick pay for a week and then SSP of £95.85 for any remaining time; being temporarily furloughed; taking time off as holiday and using up their annual entitlement; and being told to take time off as unpaid leave.

Some say they’ve been kept in the dark about arrangements, with one worker finding their wages had been reduced by £500 following a two-week absence, with no explanation about how this was calculated.

For those who have needed to shield – either for themselves or family members – just 31% were fully paid.

More than one in five (22%) received only SSP, while 9% were told they had to carry on working and 8% told they would receive no pay at all.

The analysis showed one in 10 care workers said they were aware of colleagues who continued working despite having Covid-19 symptoms.

Other staff have told the union their income is dropping in other ways with care home workers saying their shifts have reduced because the number of residents has fallen dramatically.

Some care staff working out in the community say they have fewer people to look after because some clients are in isolation or shielding, affecting their payments.

Unison assistant general secretary Christina McAnea said: ‘It's a confusing picture for care workers who are being treated very differently depending on where they work.

‘But the bottom line is thousands are facing heartbreaking choices about whether to stay off work or pay the bills.

‘Already on incredibly low pay and in precarious work, they feel compelled to carry on simply to make ends meet and keep their jobs.’

‘Ministers have to make sure care staff are not out of pocket so we can halt the spread of the virus for the sake of carers and the vulnerable people they look after,’ she added.

Responding to Unison’s research, a Government spokesperson said: ‘We recognise the vital support and hard work of our social care workforce during these challenging times and nobody should be forced to take unpaid leave.

‘We have given £3.2bn to councils to help them meet financial pressures, including the costs of social care, and an additional £600m through the Infection Control Fund to help maintain the normal wages of staff who may need to self-isolate.

‘Employers have also been able to furlough care workers who cannot work for a long period of time if they are in a high-risk group or shielding, meaning they continue to receive 80% of their normal income.’