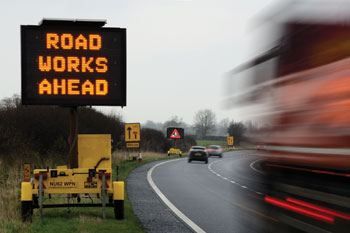 Local authorities are being warned to stay on the right side of the law in the battle to keep traffic on the move.

New guidance laid down by the Department for Transport (DfT) spells out the legal requirements for variable message signs (VMS).

And councils are being urged to ensure all roadside units capable of displaying changing text or pictograms make the grade.

Brian Lyus, of the Association for Road Traffic Safety and Management (ARTSM), said: ‘Increasing numbers of authorities are now using digital signs to get their message across.

‘But compliance and quality can sometimes be neglected in the face of price pressure.

‘Guidance issued by the DfT recently spells out the requirements for variable message signs laid down in the Traffic Signs Regulations and General Directions 2002 (TSRGD).

‘It’s a reminder that councils must tread very carefully to ensure they don’t break the rules.’

Mr Lyus says traffic displays must conform to the regulations or those using them face the risk of non-compliance and the creation of an unenforceable sign.

He added: ‘Some councils may still be unaware of legal requirements for the form of the displays as well as the messages, fonts and colours to be used on UK roads.

‘And permanently-installed variable message signs must conform to EN 12966 and be CE marked.

‘It’s obviously important to get signing right, both for maximum prominence and from aspects of safety and compliance.’

The DfT Traffic Advisory Leaflet acts as a reminder to authorities that VMS must be used to display only signs as defined in the Road Traffic Regulation Act. It says their use to display any other messages makes the installation unlawful.

The guidance spells out rules for the siting of signs and the requirements on aspects including the form of display, sign housing and messages.

And David Skinner, of Rennicks UK, believes anyone involved in the delivery of services for the road network should familiarise themselves with it.

He said: ‘The document enables local authorities and other highways operators to understand their obligations when it comes to signage.

‘There’s no longer any ambiguity and, as the requirements are laid down in black and white, there’s also no excuse for getting it wrong.

‘Ultimately it’s their responsibility, but at Rennicks, we offer advice and training on the lawful creation of road traffic signage to ensure our customers stay within the rules.’

The DfT guidance insists messages should be as short as possible while still being fully comprehensible to drivers. It says they should not normally consist of more than eight words or six units of information and reminds operators that the use of multiple displays (paging) and scrolling text is also unlawful.

Mr Skinner added: ‘Some signs on the market cannot cope with certain messages due to LED and size limitations – and operators can be forced to abbreviate words or scroll them to make it work.

‘But, as the guidance states, that’s unlawful and leads to the creation of an unenforceable sign.

‘Our signs are a significant step forward in terms of technology. They can cope with large messages due to the market-leading density of the LEDs and will create accurate representations of signs that are fully compliant with all DfT guidelines.